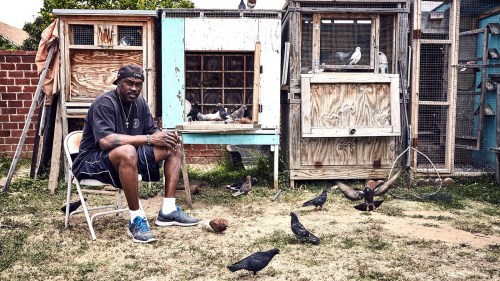 New to DVD and VOD this week:
PIGEON KINGS

About:
A portrait of men who engage in the sport of competitive pigeon flying in South Central LA.

The Birmingham Roller, named for its origins in England, is a breed of domesticated pigeon that is known for its unusual tendency to perform somersaults in the air, leading to its breeding for show competitions. Director Milena Pastreich explores one such community of competitive pigeon flyers that has developed over several decades among African American and Latino men in South Central LA. Her focus is veteran breeder Keith, who serves as a mentor to the younger Choo Choo, an eager birdman who has nevertheless struggled in the sport. As they prepare for the world cup competition, the doc reveals how their passion for their birds has impacted their lives. Pastreich could have delved into the specifics of the sport’s unclear scoring and mechanics more, given how much footage of somersaulting birds she includes, but her scrappy film ultimately benefits from the endearing personalities on display.