About:
This well-respected Swiss nonfiction event remarkably has been able to respond quickly to the COVID-19 crisis, transitioning to a robust online edition, most of which is available worldwide for free.

The notable exception to broad access is the National Competition, which is limited to audiences in Switzerland beginning today. Among the offerings are world premieres like Aldo Gugolz’s COWS ON THE ROOF, a portrait of an expectant father and Alpine cheese producer as he reckons with guilt; Nick Brandestini’s SAPELO, about the vanishing Geechee African American community of the titular Georgian barrier island; Mirjam Landolt’s RARA AVIS, which follows a rehabilitation program for teenagers on a sailboat; Olivier Zuchuat’s THE PERIMETER OF KAMSÉ, about the efforts of the women of a Burkina Faso village to combat desertification; Raphaël Holzer’s PRIVÉ, the filmmaker’s profile of his detective father; and Julie Biro and Antoine Jaccoud’s RETURN TO VISEGRAD, chronicling the reunion of Serbian and Bosnian classmates separated by war.

Films from remaining sections will be available to be viewed on the festival’s website beginning next week, following a simple registration process, regardless of the viewer’s geolocation. These include the films of the International Competition, which features debuts such as: Daniel Hoesl and Julia Niemann’s DAVOS, an observational portrait of the Swiss village that serves as the site for the influential annual World Economic Forum; Eytan Ipeker’s THE PAGEANT, about a troubling beauty contest for female Holocaust survivors; Mo Scarpelli’s EL FATHER PLAYS HIMSELF, in which a son shoots a fictional feature based on the past of his father, from whom he was long separated; Gabriel Tejedor’s KOMBINAT, a profile of the inhabitants of a Russian industrial city; Amin Behroozzadeh’s FISH EYE, which chronicles the harsh conditions of industrial fishing; and Laura Plancarte’s NON WESTERN, which explores painful history through the story of the impending marriage between an indigenous man and non-indigenous woman in Montana; 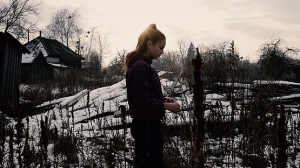 Mostly available beginning today – some titles appear to be geo-restricted – are films in the International Medium Length Competition, including: Tomasz Wolski’s AN ORDINARY COUNTRY, which reveals life during the surveillance state of Cold War Poland; Alexandra Dalsbaek’s WE ARE RUSSIA, following the activities of young anti-Putin political activists in Russia; Daria Yurkevich’s INVISIBLE PARADISE, a portrait of the idyllic existence of three Belarusian sisters living near the Chernobyl Exclusion Zone; and Pauline Horovitz’s PAPA S’EN VA, the filmmaker’s profile of her father, a retired doctor-turned-aspiring actor.

Available beginning on April 25 are the films of the formally daring Burning Lights Competition, which includes: Phillip Warnell’s INTIMATE DISTANCES, which follows a casting director seeking a type on the streets of Queens; Kamal Aljafari’s UNUSUAL SUMMER, which captures street scenes in front of the Palestinian filmmaker’s family home in Israel; Xiaozhen Wang’s LOVE POEM, in which the filmmaker transforms the interior of his car into a film set; Marie Voignier’s NA CHINA, following African women entrepreneurs in China; Hamza Ouni’s THE DISQUALIFIED, a longitudinal portrait of a Tunisian performer and gambling addict; and Francisco Bermejo’s THE OTHER ONE, about a seaside hermit and the remains of a white whale.

MIRROR, MIRROR ON THE WALL

Additional sections include Grand Angle, with world premieres like Martin Páv’s WOLVES AT THE BORDERS, about the controversial reintroduction of wolves to a Czech region; and Sascha Schöberl’s MIRROR, MIRROR ON THE WALL, a portrait of a Chinese celebrity plastic surgeon, available beginning April 25; while the non-competitive Latitudes begin a day earlier, with films such as Wen Hai, Jingyan Zeng, and Trish McAdam’s OUTCRY AND WHISPER, a political manifesto for Chinese and Hong Kong women; Atieh Attarzadeh and Hesam Eslami’s THE MARRIAGE PROJECT, about an Iranian psychiatric center that allows marriage between patients; Teboho Edkins’ DAYS OF CANNIBALISM, which explores the impact of Chinese development in Lesotho; and Nuria Giménez’s MY MEXICAN BRETZEL, which reveals the life of a far-traveling Swiss woman in the 1950s-’60s through her husband’s extensive archives.