On TV: WHERE THE PAVEMENT ENDS 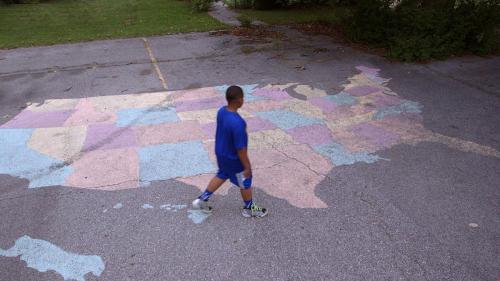 Coming to The WORLD Channel’s America ReFramed tonight, Tuesday, May 5:
WHERE THE PAVEMENT ENDS

About:
A meditation on the history of race relations in Ferguson MO and its neighboring black-only town, Kinloch.

Taking as her starting point the August 2014 slaying of 18-year-old African American Michael Brown Jr by white police officer Darren Wilson in Ferguson MO and the protests and outrage that followed, Jane Gilooly – who grew up in Ferguson – attempts to trace the roots of the racial division in the area by examining the community’s past. At the core of her film is the long-standing controversy of the segregation between Ferguson, historically all-white, and its neighbor, Kinloch, all-black, literalized for decades by the maintenance of a physical barrier on the main border road, preventing easy travel between the two towns until it was finally removed in the late 1970s. Taking a contemplative approach, with as much visual focus on the landscape as on individuals, and a measured pace that may test some viewers, Gilooly examines the harmful impact of this institutionalized segregation through archival artifacts and the oral testimony of residents of both communities, a legacy that informs the shooting of Michael Brown.