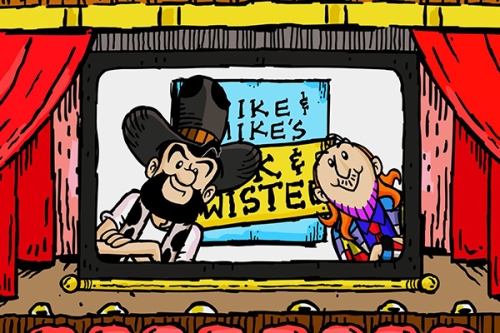 About:
A history and appreciation of the Spike and Mike Festival of Animation.

In 1977, film and music promoters Craig “Spike” Decker and Mike Gribble launched Spike & Mike’s Festival of Animation, a touring animated film festival that has been credited with launching the careers of scores of animation masters, while also developing an adult fanbase for the genre – particularly in its later embrace of more outrageous content under the moniker Spike & Mike’s Sick and Twisted Festival of Animation, beginning in 1990. Filmmaker Kat Alioshin, who worked for the duo back in the 1980s, takes an appreciative, if insider, approach to her history of Spike and Mike, drawing from an assemblage of animators, other former staff, and admirers of their festival. Largely driven by talking heads anecdotes, though spruced up with clever if chaotic animation, the film highlights the creators and their event’s unique carnivalesque approach, audience interactivity, and guerrilla marketing tactics. It’s hagiography, but there’s no doubting the importance of Spike and Mike to the animation world, and there’s certainly an appreciative audience for a film celebrating them and their work.