After a successful inaugural event last year, Thom Powers and Raphaela Neihausen’s DOC NYC returns for 2011 with additional days and an expanded line-up which includes over 50 feature-length documentaries. Running November 2-10, the festival pulls from Powers’ Toronto line-up (where he serves as documentary programmer) while also presenting a number of US and international films to make their NYC debut. Taking a section-by-section look at this year’s events, here are the titles I’m most interested in trying to see: 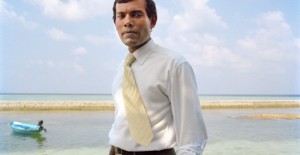 Of the three Galas, I’ve already seen and written about the opener, Werner Herzog’s INTO THE ABYSS out of TIFF, but unfortunately missed THE ISLAND PRESIDENT (pictured) at the same fest. Jon Shenk’s portrait of the Maldives’ leader, Mohamed Nasheed, has received rave reviews, so I’m looking forward to seeing the film at DOC NYC’s Awards Night. The film is also part of the fest’s Viewfinders competition.

The Viewfinders competition features ten US and international films “celebrating directors with a distinct directorial vision.” Among these, I wrote favorably about two out of SXSW – KUMARÉ and FAMBUL TOK – and one out of Silverdocs – SCENES OF A CRIME. Of the remainder, two especially have caught my eye: CALVET (pictured), Dominic Allan’s profile of artist Jean Marc Valvet and his bizarre backstory; and INGRID BETANCOURT – SIX YEARS IN THE JUNGLE, Angus Macqueen’s exploration of the subject’s ordeal as the hostage of Colombian guerrillas.

DOC NYC also features the Metropolis competition, “highlighting diverse New York stories.” One of these, FIRST POSITION, impressed me at Hamptons earlier this month, after I missed it at TIFF. Of the six remaining films in this competition, I’m drawn to three: Peter Flynn’s BLAZING THE TRAIL: THE O’KALEMS IN IRELAND, looking at one of NYC’s silent film companies; GIRL WITH BLACK BALLOONS (pictured), Corinne van der Borch’s profile of Bettina, a long-time resident of the Chelsea Hotel; and THIS SPACE AVAILABLE, Gwenaëlle Gobé’s exploration of urban visual pollution, inspired by the writing of her father, Marc Gobé. 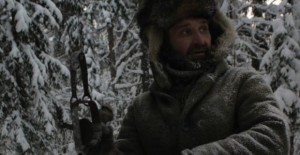 The festival designates a few screenings as “Special Events,” including a film originally slated to screen here last year: THE SOUND OF MUMBAI: A MUSICAL, which I wrote about out of last year’s TIFF. I’m glad that NYers will have a chance to experience Sarah McCarthy’s thoughtful look at a unique concert put on by slum-dwelling children in Mumbai. Also screening in this section is the can’t-miss HAPPY PEOPLE: A YEAR IN THE TAIGA (pictured), Dmitry Vasyukov’s four-hour look at Siberian fur trappers, as condensed and narrated by the one-and-only Werner Herzog into about an hour and a half.

Speaking of one-and-only subjects, DOC NYC presents its Icons section, “films that bring fresh insights into maverick personalities.” Among those mavericks is acclaimed choreographer Bill T Jones, as seen developing a new show on Abraham Lincoln in Bob Hercules and Gordon Quinn’s provocative A GOOD MAN, which I wrote about out of Silverdocs this Summer. On the lighter side, Icons also includes Nikki Frakes, Terry Dougas, and Will Hess’ WITH GREAT POWER: THE STAN LEE STORY (pictured), an appreciation for one of the masterminds of Marvel Comics, the co-creator of Spider-Man, the Fantastic Four, and so many others.

The festival features a panoramic view of the world of docs in its American & International Perspectives sections. In the former, I’ve written about two worthwhile films: Michael Tucker and Petra Epperlein’s Mixed Martial Arts doc, FIGHTVILLE, which I profiled following its SXSW premiere; and Jennifer McShane’s look at incarcerated mothers, MOTHERS OF BEDFORD, which I covered out of its world premiere at Hot Docs. I only managed to catch a short part of I’M CAROLYN PARKER at TIFF this year, so I’d like to see Jonathan Demme’s portrait of a Lower Ninth Ward resident post-Katrina in full. In addition, Scott Rosenfelt’s STANDING SILENT (pictured), about a sexual abuse scandal in an Orthodox Jewish community, looks intriguing.

On the international side, I’m curious about two docs looking at families in and through cinema: Viviana García Besné’s PERDIDA (pictured), about Mexico’s Calderón family, responsible for building popular movie palaces and producing outlandish genre films; and Andrei Zagdansky’s MY FATHER EVGENI, about a father and son’s work for a Ukrainian film studio.

DOC NYC spotlights a number of kid-appropriate selections in their Kaleidoscope Family Docs section, as well as non-fiction for music fans in Midnight Rock Docs. The Short-List section includes four popular docs likely to figure in the upcoming awards season (all Sundance alums!). The festival also features a number of shorts programs, a six-program tribute to the late documentary legend, Richard Leacock, and fifteen panels, including case studies, conversations with filmmakers, explorations of craft, and considerations of the business side of docs.