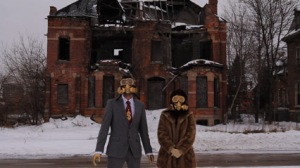 My look at Sundance 2012′s US Documentary Competition continues with returning filmmakers Heidi Ewing and Rachel Grady: DETROPIA, the story of a city, its decline, and its uncertain future.

Detroit’s story has encapsulated the iconic narrative of America over the last century— the Great Migration of African Americans escaping Jim Crow; the rise of manufacturing and the middle class; the love affair with automobiles; the flowering of the American dream; and now… the collapse of the economy and the fading American mythos.

With its vivid, painterly palette and haunting score, DETROPIA sculpts a dreamlike collage of a grand city teetering on the brink of dissolution. As houses are demolished by the thousands, automobile-company wages plummet, institutions crumble, and tourists gawk at the “charming decay,” the film’s vibrant, gutsy characters glow and erupt like flames from the ashes. These soulful pragmatists and stalwart philosophers strive to make ends meet and make sense of it all, refusing to abandon hope or resistance. Their grit and pluck embody the spirit of the Motor City as it struggles to survive postindustrial America and begins to envision a radically different future.

Some Background:
Filmmaking duo Ewing and Grady have collaborated on a number of non-fiction projects through their Loki Films production company. Their first project, THE BOYS OF BARAKA (2005), debuted at SXSW, received theatrical distribution through ThinkFilm, was broadcast by POV, and was nominated for an Emmy. Their follow-up, JESUS CAMP (2006), made its premiere at Tribeca and was nominated for an Oscar. The pair made their Sundance debut with 12TH & DELAWARE (2010). They also contributed to the omnibus adaptation of FREAKONOMICS (2010), which premiered at Tribeca and was released by Magnolia.

Why You Should Watch:
As noted above, Ewing and Grady have a reputation for exceptional non-fiction work, and their latest is no exception. They take an impressionistic view of Detroit and of the larger issues underscored by the city’s decline, training their cameras on a varied and intriguing selection of subjects – from the controversial plan to shift the city’s center to the influx of young artists drawn to the possibilities of a cultural renaissance (and cheap rents). Taking the pulse of the Motor City through this multiperspectival approach, the filmmakers examine not only Detroit, but a Recession-era America and its fears and hopes.

More Info:
The doc’s page on the filmmakers’ Loki Films site may be found here, and its Facebook page here. Ewing and Grady discuss their doc in a “Meet the Artists” interview for Sundance here and with Indiewire here. For screening dates and times at Sundance, click the link in the first paragraph.