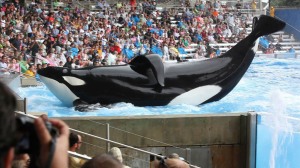 Continuing my doc-by-doc look at Sundance 2013: Gabriela Cowperthwaite’s US Documentary Competition title, BLACKFISH, an exploration of the risks of keeping killer whales in captivity – for both the orcas and their trainers.

Many of us have experienced the excitement and awe of watching 8,000-pound orcas, or “killer whales,” soar out of the water and fly through the air at sea parks, as if in perfect harmony with their trainers. Yet, in our contemporary lore this mighty black-and-white mammal is like a two-faced Janus—beloved as a majestic, friendly giant yet infamous for its capacity to kill viciously. BLACKFISH unravels the complexities of this dichotomy, employing the story of notorious performing whale Tilikum, who—unlike any orca in the wild—has taken the lives of several people while in captivity. So what exactly went wrong?

Shocking, never-before-seen footage and riveting interviews with trainers and experts manifest the orca’s extraordinary nature, the species’ cruel treatment in captivity over the last four decades, and the growing disillusionment of workers who were misled and endangered by the highly profitable sea-park industry. This emotionally wrenching, tautly structured story challenges us to consider our relationship to nature and reveals how little we humans have learned from these highly intelligent and enormously sentient fellow mammals.

Some Background:
Cowperthwaite has a background in television, directing and producing for a number of cable networks, including History Channel, Animal Planet, and National Geographic. This marks her second documentary feature – her first, CITY LAX: AN URBAN LACROSSE STORY, screened at a number of festivals in 2010.

Why You Should Watch:
Going straight to the source – trainers who worked with orcas, including main subject Tilikum – Cowperthwaite elicits first hand perspectives on the the conditions at marine parks that have contributed to dangerous accidents and tragic fatalities, revealed in often disturbing footage that rarely, if ever, has been seen by the public. The result provides a deeper understanding of a much maligned marine species, and an indictment of corporate interests at the cost of human empathy.

More Info:
To keep updated on the film, stay tuned for its website, which is currently under construction. For more information on Cowperthwaite, check out her website. For Cowperthwaite’s thoughts on her doc, check out her Meet the Artists profile for Sundance and her Indiewire interview. For screening dates and times at Sundance, click the link in the first paragraph.