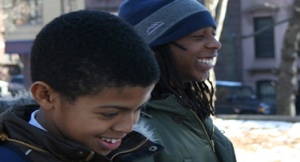 In 1999, filmmakers Joe Brewster and Michèle Stephenson turned the camera on themselves and began filming their five-year-old son, Idris, and his best friend, Seun, as they started kindergarten at the prestigious Dalton School just as the private institution was committing to diversify its student body. Their cameras continued to follow both families for another 12 years as the paths of the two boys diverged—one continued private school while the other pursued a very different route through the public education system.

AMERICAN PROMISE is an epic and groundbreaking documentary charged with the hope that every child can reach his or her full potential and contribute to a better future for our country. It calls into question commonly held assumptions about educational access and what factors really influence academic performance. Stephenson and Brewster deliver a rare, intimate, and emotional portrait of black middle-class family life, humanizing the unique journey of African-American boys as they face the real-life hurdles society poses for young men of color, inside and outside the classroom.

Some Background:
Brewster and Stephenson are Sundance alumni with 1996’s THE KEEPER – Brewster wrote and directed his debut fiction film, which Stephenson associate produced. Stephenson directed the documentaries FACES OF CHANGE (together with Stanley Nelson), and COMING HOME: THE DRY STORM, while the couple jointly produced and directed the documentary SLAYING GOLIATH. Serving as executive producers are Impact Partners’ Dan Cogan and POV’s Simon Kilmurry – the film will be part of the popular PBS doc series next year.

Why You Should Watch:
As I noted in my In the Works profile of the project during its Kickstarter campaign, I’m generally awestruck by longitudinal projects like this one and the opportunity they offer audiences to witness transformations over time. Brewster and Stephenson’s film is destined to be a classic of the genre – an engrossing exploration of race, education, and expectations featuring strong, personable characters who the viewer feels connected to immediately.

More Info:
Take a look at the film’s trailer, and learn more about the doc at its website and Facebook page. For the directors’ thoughts on the film, check out their Meet the Artists profile for Sundance and Indiewire interview. For screening dates and times at Sundance, click the link in the first paragraph.