Continuing my roundup of SXSW documentary (I wrote about Competition films last week here), today’s post looks at the festival’s non-competitive Documentary Spotlight section. Of the nineteen films in this category, I sadly only got to see seven. I’m especially sad to have missed I AM DIVINE, BEFORE YOU KNOW IT, TINY: A STORY ABOUT LIVING SMALL, REWIND THIS!, THE NETWORK, MEDORA, and this section’s Audience Award winner, AN UNREAL DREAM, but I’ll hopefully get to catch up with those elsewhere on the circuit soon. I’ll cover the remaining sections in a post tomorrow.

GOOD OL’ FREDA
Director Ryan White, one of the filmmakers behind PELADA, returned to SXSW with a solo effort, a winning profile of the Beatles’ longtime secretary, Freda Kelly, who worked for the Fab Four longer than they were together as their official fan club secretary (pictured above). Unlike others in the band’s circle, Kelly never tried to cash in on her famous connections, and, in fact, has spent the past half century working as a secretary and raising a family. True to form, she maintains her deep-seated integrity and loyalty in White’s film as well – there’s no airing of dirty laundry here, and the affable Kelly doesn’t kiss and tell, even when prompted. Instead, the film reveals a self-proclaimed Beatles fan who got to have the ultimate fan dream job and witness firsthand the unexpected development of a small Liverpudlian foursome into a bona fide worldwide phenomenon. Kelly, and her everywoman perspective, charms the audience, whether they’re diehard Beatles fans or not. Beyond gaining Freda’s confidence, White accomplished what very few have ever been able to do – not only win the endorsement of the surviving Beatles, but also gain permission to include multiple tracks from their library in his film.

DOWNLOADED
Another music and fan focused film in this section comes from actor-turned-director Alex Winter. Gathering together all the principal players behind Napster, Winter delves into the rise and fall of the industry-changing controversial site. Essentially the first service to enable fans to easily share music files with one another, Napster paved the way for the digitally-oriented music landscape we have today – and it was the work of teenagers Shawn Fanning and Sean Parker. Winter’s film details the site’s origins, Fanning and Parker’s motivations, and the copyright battles that ultimately led to Napster’s downfall. While the doc perhaps aims to be too comprehensive in its retelling, the participation Winter gets is impressive, and he makes his point absolutely clear that the recording industry’s own entrenched and backwards-thinking business model claimed not only Napster, but their own viability. It makes for a perfect double feature with fellow SXSW title TPB AFK: THE PIRATE BAY – AWAY FROM KEYBOARD.

UNHUNG HERO
Speaking of sharing, the viral video that resulted when Patrick Moote’s girlfriend rejected his public marriage proposal led to a crisis of confidence when he learns why she couldn’t say yes: his penis is too small. Joining forces with director Brian Spitz, Patrick sets off to determine if he does, in fact, have a small penis, and, if so, what he can do about it. Playing an on-screen guide through the world of penis enlargement and all things phallus, Patrick is likeable in his unassuming and at times put-upon persona, whether he’s visiting sex toy moguls or trying on a pair of weights to elongate his member. Despite this, there’s a definite sense of disingenuousness that’s felt that undercuts the project at various times – from a too-convenient relationship that blossoms after an unconvincing (and entirely unmotivated) hidden camera episode in a sex toy shop, to a too-gullible to be believed early focus on the viability of commercially-available penis enlargement pills, to a fake out involving an injection of oil into Patrick’s shaft. What’s perhaps ultimately most telling is that a film about penis size goes out if its way to not show Patrick’s penis, underscoring the anxiety at the heart of conceptions of Western masculinity. 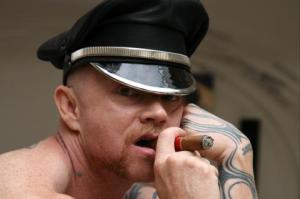 CONTINENTAL
Also groundbreaking in its embrace of sexual expression is the subject of Malcolm Ingram’s newest documentary, NYC’s storied Continental Baths. From 1968 to 1975, the site served as ground zero for gay men’s exploration of their newfound open sexuality, and, perhaps more surprisingly to some viewers, became a hot spot for clientele of all sexual persuasions to let loose and discover a string of eventually mainstream performers like Bette Midler and Barry Manilow, who got their starts performing there. At the center of Ingram’s story is Steve Ostrow, the owner of the Baths, a born storyteller whose anecdotes about his establishment’s hedonistic heyday serve to transport the viewer back to a very different era. Like the recent spate of films revisiting the darkest, early days of the AIDS crisis, the film provides a window into the American gay experience that was lost with an entire generation of men. Unlike those films, however, this story really ends before their tragic loss, capturing instead a time of celebration, albeit a temporary one.

GETTING BACK TO ABNORMAL
In its own way a celebration of a place, Louis Alvarez, Andrew Kolker, Peter Odabashian, and Paul Stekler’s film unveils post-Katrina New Orleans, especially in its complex relation to race and politics. Though ostensibly centering on the re-election campaign of city councilmember Stacy Head, a white woman representing a majority black district, the filmmakers cast their nets much wider in their exploration of the at times fraught relationship between the races. Among the controversies addressed are the mayoral race which sees the first white victor in decades, the demolition of public housing to be replaced with mixed-income developments with restrictive policies, and even Brad Pitt’s green home building initiative, criticized by some longterm residents as being out of step with the desires of the locals. Frankly, less probably would have been more, but this accumulation of issues does provide some insight into the realities of life in the Big Easy. Still, I found myself more engaged by the often abrasive and charmingly neurotic Liz Lemon-like Head, and especially her scene-stealing staffer, Barbara, and the struggle they wage to keep their seat against charges of racism by their smooth-talking pastor opponent.

XMAS WITHOUT CHINA
In contrast, Alicia Dwyer’s film is very focused – perhaps too much so. The film is centered on a challenge made by Chinese immigrant Tom to the stereotypically “all-American” Jones family: celebrate Christmas without using or buying any products made in China. Tom, who has lived in California since a small child, intends to make the Joneses (and the film’s viewers) recognize just how connected we all are to China’s industry in all facets of our lives, while the Jones family, motivated by media reports about toxic products manufactured in China, are curious to see how dependent they really are. It’s an intriguing premise, and one that exposes the two countries’ consumer relationship, but in a fairly surface manner, and from a somewhat one-sided, American, middle-class perspective. Dwyer’s film doesn’t attempt to explore larger socioeconomic or political factors in play between the US and China. While that doesn’t have to be in the scope of her project, of course, there’s a lack of dynamism to her subjects that lessens the impact of their crosscultural experiment for the viewer, suggesting that the film could have used an injection of something beyond these characters.