Paris’ documentary festival, Cinéma du Réel, opens tomorrow, Thursday, March 21, and runs through Sunday, March 31. Since 1979, the event has promoted non-fiction film at the famed Le Centre Pompidou and other locations around Paris. This year’s edition includes nearly forty new feature length documentaries, plus scores of shorts, retrospective screenings, panels, installations, and other special events. Although I’m not attending, the following offers some highlights from this year’s program:

Eleven titles are included in the festival’s International Competition, with films hailing from as far afield as Bangladesh and China. Among these are Alejo Hoijman’s THE SHARK’S EYE, a coming of age slice of life in Nicaragua; Dominique Cabrera’s O HAPPY DAYS!, a personal document of family over a decade; Ignacio Agüero’s THE OTHER DAY, in which the filmmaker explores the concept of home – his own and those of the less fortunate he comes across; Kamar Ahmad Simon’s ARE YOU LISTENING! (pictured), also exploring the meaning of home in its portrayal of a Bangladeshi family living in uncertainty following the loss of everything by a tidal wave; and Massimo D’Anolfi and Martina Parenti’s DARK MATTER, a tripartite exploration of a Sardinian mountain region used for different purposes by NATO, the Italian army, and local farmers.

Eight additional films participate in the International First Films Competition, including Denis Klebleev’s 31ST HAUL, which follows two Russian truckers on their route; Rubén Margalló’s STILL LAND (pictured), a portrait of a Nicaraguan family, seemingly frozen in time and place; Adrien Lecouturier’s FIEBRES, accompanying a doctor on his unusual rounds, treating gold and diamond miners in the Amazon; and Yuki Kawamura’s MIRROR OF THE BRIDE, an impressionistic and conflicted portrait of the filmmaker’s dying grandmother. 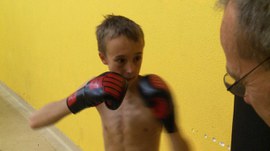 Cinéma du Réel’s French Competition shines the spotlight on local talent. Notable here are Alexander Abaturov’s SLEEPING SOULS, a knowing look at the 2012 Russian presidential election, as played out in a small Siberian town; François-Xavier Drouet’s THE HUNTING OF THE SNARK (pictured), following a year at a Belgian institution for children with behavioral problems; Daniela De Felice’s CASA, a journey into memory brought on by the filmmaker’s documentation of her mother’s packing up of the family home; and Alessandra Celesia’s AN ITALIAN MIRAGE, a study of the disparate Torinese who respond to an opportunity to work in Alaska.

Outside of these various competitions, the festival also presents a number of special screenings, which include films like Nicolas Philibert’s LA MAISON DE LA RADIO, a behind-the-scenes look at a Parisian radio station; a sidebar called “Imaginary Countries, Real Countries,” which questions national mythmaking, and features titles like Eugenio Polgovsky’s MEXICAN RITUAL (MITOTE) (pictured), which explores the varied uses of Mexico City’s Zocalo; and Sabine Gruffat’s I HAVE ALWAYS BEEN A DREAMER, which contrasts the development of Dubai and Detroit; and numerous retrospectives. Among the latter is a historical tie-in to “Imaginary Countries,” a series looking at representations of the Great Depression in films of the era, “Art and Crisis: From the New Deal to Nowadays.” Other retrospectives include a commemoration of the 40th anniversary of the coup d’état in Chile by Augusto Pinochet; a tribute to the late UK director Stephen Dwoskin; and a look back at the work of Indian documentarian Arnand Patwardhan.