On VOD: TO MAKE A FARM 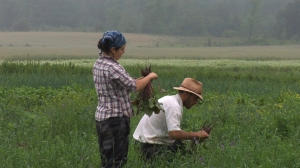 Now on VOD: TO MAKE A FARM

Steve Suderman’s profile of young Canadian farmers debuted at Vancouver in 2011, where it was one of the top ten audience favorites. It went on to screen at Big Sky, Washington DC Environmental, Minneapolis St Paul, Shanghai, Princeton Environmental, and several other environmental and food-related events. FilmBuff released the film on iTunes, Amazon, YouTube, XBOX, nook, Cinemanow, and Vudu yesterday.

Coming from a farm background himself, Suderman narrates this nicely-shot look at three sets of small-scale farmers in Ontario and Manitoba, Canada – two couples, Tarrah and Nathan and Leslie and Jeff, and one-man-band Wes. Following them over the course of a year as they set up their farms, plant and harvest their crops, and tend to their animals, the engaging film gives viewers a clear sense of the challenges of their endeavor – physically, emotionally, and economically. Being Canadian, the subjects are affable without being naive, candidly expressing the sometimes utopian sentiments that led them to pursue farming, but also honest enough about how hard it is to make it work. They make the point that they’re largely starting from scratch – even if they’ve studied organic farming, they’re at a disadvantage compared to past farmers who drew on generational knowledge that has in many ways been lost with the move to large-scale industrial farming. For his part, director Suderman comments on this transformation of agriculture, but his occasional anti-industrial narration feels like an ill-fit with the more successful observational footage of the farmers going about their various chores.