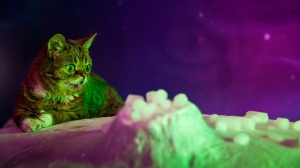 This post wraps up my coverage of Tribeca with a look at eight docs from the festival’s Spotlight section, a programming strand meant to straddle indie and mainstream sensibilities. I should note that Spotlight included two additional docs that I didn’t get a chance to watch – GASLAND PART II and IN GOD WE TRUST – and a couple whose subject matter just didn’t pique my interest enough to watch – MCCONKEY and THE MOTIVATION.

LIL BUB & FRIENDZ
Juliette Eisner and Andy Capper casually explore the Internet’s love for cats in this winner of the Tribeca (Online) Film Festival (pictured above), focusing on the beloved Lil Bub, a cat whose multiple congenital physical conditions have lent her a ridiculously adorable, perpetually kitten-like appearance. She’s joined by her also-not-so-bad-on-the-eyes human companion, Mike Bridavsky, a low-key Midwesterner who seems generally bemused by Bub’s celebrity. Beyond following Bub and Mike around, the filmmakers also check in on various other Internet cat celebrities, both real – Grumpy Cat – and digital – Nyan Cat – as well as cat fanatics and efforts like the Walker Art Center’s Cat Video Film Festival to unite them all. As a roughly hourlong glimpse into Internet cat celebrity, the film pretty much delivers on its simple promise, but is more diversionary than revelatory, and crosses the line into being unnecessarily manipulative with a health scare late in the film. Still, there’s clearly an audience, and it’s enjoyable enough as a harmless, surface look behind some popular cat memes and clips. 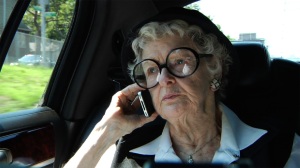 ELAINE STRITCH: SHOOT ME
A more insightful look at celebrity can be found in Chiemi Karasawa’s excellent profile of the 87-year-old stage and screen actress as she continues to work while facing diabetes. Though familiar to younger audiences for her scene-stealing recurring guest role on 30 ROCK, Stritch’s decade-spanning stage and screen career gives Karasawa a wealth of history to draw from as the brash Tony and Emmy Award-winner takes her one-woman show on tour, probably for the last time. Offering intimate insight into her remarkable work ethic, and what drives her to perform, even at an advanced age, the film reveals the actress to be a captivating, if occasionally cantankerous, professional, and one who’s open enough to show true vulnerability as she deals with health concerns. Despite some serious moments, however, Karasawa understands that to be true to Stritch, she can’t downplay her acerbic sense of humor, and she smartly conveys it throughout.

I GOT SOMETHIN’ TO TELL YOU
Whoopi Goldberg garnered attention for this documentary, her directorial debut, last Summer, when she launched its Kickstarter campaign. Considering the amounts celebrity-driven projects like the Veronica Mars film or Zach Braff’s GARDEN STATE follow up have since sought, Whoopi’s $65,000 post-production financing goal now seems downright paltry. The resulting film, a warm tribute to pioneering African American comedienne Moms Mabley, might be generally conventional, but it succeeds in capturing the reverence a range of notable celebrity comedians have for the now largely-unknown figure. Less a biographical portrait than a profile revealing Mabley’s sociocultural and personal import to Goldberg and African Americans in general, the film – often through Goldberg herself as a somewhat awkward but genuine onscreen host – only offers scarce personal background: Despite Moms’ matronly performance persona, complete with wig and an eyesore housecoat, she preferred sharp suits and the company of young women offstage, and was rumored to have been raped more than once earlier in her life. But it’s not her personal life that made her so successful – first on the vaudeville circuit, and later through numerous TV appearances, party albums, and even a Top 40 song – it’s her humor, and there’s much of it on display. Helpfully, given Mabley’s unusual voice and delivery – partly a product of performing sans teeth – Goldberg periodically provides playful onscreen text for her often very funny stories. 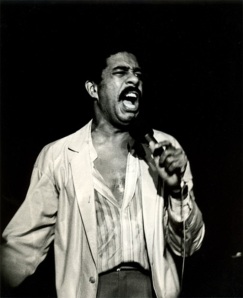 RICHARD PRYOR: OMIT THE LOGIC
Another Spotlight entry offering a retrospective appreciation for a comedy legend, Marina Zenovich’s portrait was commissioned by Showtime, and comes to the network later this month. The film traces Pryor’s career from his earliest days, surprisingly affecting a Bill Cosby-like wholesomeness (in the opinion of Nipsey Russell), to the later, unabashedly foulmouthed, racially aware, and undeniably authentic delivery that made him the most popular and best-compensated African American comedian in the world – at least until Eddie Murphy hit his stride. Zenovich doesn’t shy away from his drug problems, his tendency to marry, and divorce, often, or the nearly deadly 1980 accident that was initially rumored to be due to freebasing cocaine, but later tentatively revealed to be a suicide attempt – briefly expanded upon here by a confidant. Despite commentary from ex-wives, girlfriends, and former business associates who knew him best, the film never seems to get to Pryor’s core, feeling more like a standard, if professional, celebrity biography. Where it does impress, however, is in some unexpected archival footage – early, subdued television appearances, scenes from his short-lived TV show, an audio recording of his infamous tirade at a Hollywood gay rights event, and, perhaps most revealing, a recording, post-accident, of the comedian absolutely bombing on the first night of filming for his LIVE ON SUNSET STRIP concert film.

GORE VIDAL: THE UNITED STATES OF AMNESIA
Though not a comedian, the late subject of Nicholas Wrathall’s film could cut men down with a witty comment without breaking a sweat, and encouraged more than his fair share of controversy through his political writing and television appearances, including an infamous series of debates with conservative pundit William F Buckley Jr. Vidal, who died less than a year ago, remains a spry subject in interviews here which join with archival footage and commentary from his inner circle to present an engaging and full sense of the outspoken thinker. Wrathall covers the expanse of his personal life, from biographical details about the politicians in his family and their influence on the course of his own life, to frank discussions about his longtime companion Howard Austen, who predeceased Vidal in 2003, but this serves as more of a background for the world of ideas in which the man participated in professionally. The film shines when giving Vidal a platform to espouse his beliefs about the end of the American Republic, or when it showcases his eloquence in clips from his unsuccessful bids for public office – scenes which remind us of the loss to political discourse we’ve suffered with his passing, whether we agreed with him or not. 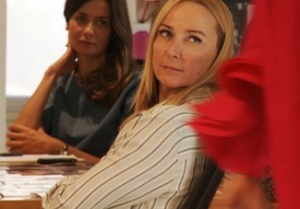 THE DIRECTOR: AN EVOLUTION IN THREE ACTS
Christina Voros presents a look behind-the-scenes at Gucci in the form of a year in the professional life of the fashion house’s creative director, Frida Giannini. As noted by its title, the film is split into three sections, “The Present,” “The Future,” and “The Past,” respectively, but, frankly, these divisions are arbitrary, their content offering only the barest rationale for the conceit and otherwise reinforcing a sense that the doc is overlong. That said, Giannini is a very watchable subject – she’s self-possessed without being pretentious, professional without being heartless, and clearly excellent at what she does. Standout scenes include her concise critiques of new dresses, shoes, and accessories, and the attention she pays to the model casting process, especially the notes she patiently gives to help an “it’ boy to properly walk. Other sequences don’t always justify their length, such as an extended sequence in China, or a commercial shoot with executive producer James Franco. As a whole, Giannini is likeable enough, and the access exclusive enough, that the film’s target fashion-minded audience will find it worthwhile, but more general audiences may be less generous.

INSIDE OUT: THE PEOPLE’S ART PROJECT
Moving somewhat outside of the realm of individual profiles, Alastair Siddons’ film explores the response to French artist JR’s TED Prize project, a global call for people everywhere to take on his large-scale public art portraiture work. Agreeing to process the photographs people take, and, in some cases, to journey to the photographers’ neighborhoods to offer advice, the enigmatic JR is really more of a conduit here rather than the focus of the film. Instead, Siddons travels around the world, presenting minor profiles of various participants, from Haiti to Tunisia, and bearing witness to the impact their displays ultimately cause – from outrage to appreciation. While it’s hard to get a clear sense of what JR’s project as a whole ultimately can hope to accomplish, some of the stories decidedly demonstrate the power that can be found in self-expression. 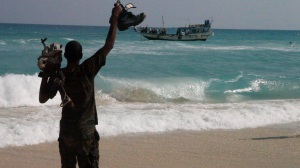 THE PROJECT
Finally, the Spotlight section wraps up with a much heavier subject – Somali piracy and the efforts of a controversial paramilitary group to combat it. Shawn Efran and Adam Ciralsky open their film by introducing the loved ones of two hostages, underlining the human lives at stake as desperate Somalian men routinely seek ransom money to release the innocents they take captive. With no functioning central government, one solution might just be the Puntland Maritime Police Force, a group of mercenaries trained by the men behind some of the most successful paramilitary organizations in the world, such as Blackwater. Though not sanctioned by the United Nations, the PMPF is committed to making a difference – even as they contend with mutiny, sabotage, and even murder within their own ranks. It makes for a sometimes shocking and often engrossing story with moral ambiguity and life-and-death consequences – though the remarkably generic title does the film no favors and has got to go.