2014 Sundance Docs in Focus: CAPTIVATED: THE TRIALS OF PAMELA SMART 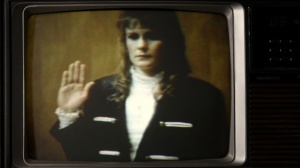 A small-town murder in New England became one of the highest-profile cases of the twentieth century. As the first fully televised court case, the Pamela Smart trial rattled the consciousness of America. From gavel to gavel, a nation tuned in, and reality TV was born. Pulsating with sex, drugs, betrayal, and murder, the trial inspired 20 years of television shows, books, plays, and movies, including TO DIE FOR, starring Nicole Kidman and directed by Gus Van Sant.

Unfolding with the suspense of a fiction film, CAPTIVATED: THE TRIALS OF PAMELA SMART reexamines a case we thought we knew and cuts into deeper, hidden layers. With surgical precision, master filmmaker Jeremiah Zagar unmasks the role of the media in creating a skewed version of reality that the public now accepts as truth. Fascinating, sexy, and cunningly brilliant, CAPTIVATED makes us question everything we’re told as the line between journalism and entertainment continues to blur.

Some Background:
The film marks Zagar’s sophomore doc feature, following 2008’s IN A DREAM – which debuted at SXSW and went on to receive two Emmy nominations – and his second film at Sundance after the 2012 short HEART STOP BEATING. Producer Lori Cheatle is known for her collaborations with Doug Block – 51 BIRCH STREET, THE KIDS GROW UP, and the upcoming 112 WEDDINGS. Serving as executive producers are several Sundance alums, including HBO Documentary Films’ Sheila Nevins (most recent Sundance titles include fellow 2014 US Doc Competition film THE CASE AGAINST 8, plus last year’s GIDEON’S ARMY, LIFE ACCORDING TO SAM, THE CRASH REEL, WHICH WAY IS THE FRONT LINE FROM HERE?, and MANHUNT); John Battsek (producer of MANHUNT and fellow 2014 entries THE GREEN PRINCE, WE ARE THE GIANT, and HAPPY VALLEY; and executive producer of several other alums, most recently THE SUMMIT (2013), THE IMPOSTER (2012), and SEARCHING FOR SUGAR MAN (2012)); his fellow Passion Pictures colleagues Nicole Stott (co-executive producer of THE GREEN PRINCE and co-producer of SUGAR MAN) and Andrew Ruhemann (executive producer of more than a half-dozen Sundance alums, most recently SUGAR MAN, PROJECT NIM (2011), and THE TILLMAN STORY (2010); Celia Taylor; and Siobhan Mullholland. Also from HBO Documentaries is senior producer Lisa Heller (past Sundance production credits include short FALL TO GRACE (2013), ABOUT FACE (2012), WIDE AWAKE (2006), UNCHAINED MEMORIES: READINGS FROM THE SLAVE NARRATIVES (2003), and BLUE VINYL (2002); while co-producer Gabriel Sedgwick previously served as associate producer on THE KIDS GROW UP. Rounding out the Sundance alums are editor Keiko Deguchi, who worked on both last year’s WHEN I WALK and TO CATCH A DOLLAR (2010).

Why You Should Watch:
The televising of Smart’s 1991 trial fed public interest in true crime stories, helping to spawn the media-obsessed culture we live in today. At the same time, the unprecedented scrutiny on the case as a whole had its own impact on the trial and the resulting fates of Smart and the men who murdered her husband. Zagar’s expertly crafted, engrossing film revisits not only the particulars of the crime, including Smart’s account, but, more cogently, the way contemporary media constructed its own, competing version that has left a long and troubling legacy.

More Info:
For more information, visit the film’s website, check out Zagar’s Meet the Artist Sundance video profile, and Indiewire filmmaker interview. For screening dates and times at Sundance, click the link in the first paragraph.

4 responses to “2014 Sundance Docs in Focus: CAPTIVATED: THE TRIALS OF PAMELA SMART”