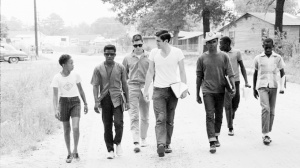 Another Sundance alumnus brings his latest to this year’s Documentary Premieres section: Stanley Nelson returns to Park City with FREEDOM SUMMER, the chronicle of a key event in Civil Rights history.

In 1964, despite the best efforts of local civil rights activists, Mississippi remained virulently committed to segregation, underscored by the systematic exclusion of African Americans from the political process. In response, Robert Moses of the Student Nonviolent Coordinating Committee developed a campaign to bring a thousand volunteers—primarily enthusiastic young white supporters—to the state to encourage voter registration, provide much-needed education, and convene a more representative delegation to attend the Democratic National Convention.

Veteran director Stanley Nelson (FREEDOM RIDERS screened at the 2010 Sundance Film Festival) captures the volatile months of that summer through remarkable period footage and the firsthand testimonies of residents and volunteers who were transformed by their time together in Mississippi. With the Supreme Court recently striking down a key section of the Voting Rights Act, Nelson’s film is a potent reminder of the sacrifices made half a century ago to ensure civil rights for all and the vigilance needed to protect what they accomplished.

Some Background:
The multiple Emmy-award winning Nelson has screened several films at Sundance before, as director of FREEDOM RIDERS (2010), WOUNDED KNEE (2009), A PLACE OF OUR OWN (2004), THE MURDER OF EMMETT TILL (2003, special jury prize), MARCUS GARVEY: LOOK FOR ME IN THE WHIRLWIND (2001), and THE BLACK PRESS: SOLDIERS WITHOUT SWORDS (1999, award winner); and as executive producer of WHEN I WALK (2013) and BEYOND BEATS AND RHYMES (2006). Joining him as producer from his Firelight Media shingle is Cyndee Readdean, and as executive producer, American Experience’s Mark Samels, a Sundance vet as executive producer or senior producer of this year’s LAST DAYS IN VIETNAM, as well as past titles FREEDOM RIDERS, WOUNDED KNEE, EARTH DAYS (2009), EMMETT TILL, GUERRILLA: THE TAKING OF PATTY HEARST (2004, under its original title NEVERLAND), THE FIGHT (2004), and THE PILL (2003). The project’s editor, Aljernon Tunsil, is also a Sundance alum, having edited FREEDOM RIDERS and WOUNDED KNEE, and assistant edited ENRON: THE SMARTEST GUYS IN THE ROOM (2005), THE FIGHT, EMMETT TILL, MARCUS GARVEY, TREMBLING BEFORE G-D (2001), THE FARM: ANGOLA, USA (1998), and WELCOME TO THE DOLLHOUSE (1996).

Why You Should Watch:
As noted in my program description above, in light of this past June’s Supreme Court decision in Shelby County v Holder, which invalidated part of the Voting Rights Act of 1965, Nelson’s film takes on an unforeseen topical importance, underscoring the need for American citizens to understand past struggles for equality even as some states now take steps to restrict the full participation of their citizens. Like his previous work, this new project meticulously combines archival material with present-day testimony of those who participated in these critical actions, reminding those who lived through the times of SNCC’s pivotal leadership, while introducing younger audiences to unforgettable figures like Fannie Lou Hamer, who powerfully spoke at the Democratic National Convention as Vice-Chair of the Mississippi Freedom Democratic Party.

More Info:
For more information, visit the film’s Facebook page. As they become available, I’ll link to Nelson’s Meet the Artist Sundance video profile and to his Indiewire filmmaker interview. For screening dates and times at Sundance, click the link in the first paragraph.