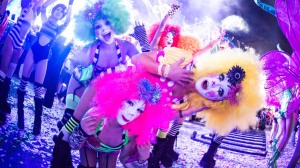 Today’s Sundance profiles wrap with the sole documentary in the Park City at Midnight section: UNDER THE ELECTRIC SKY (EDC 2013), about the legendary electronic music festival.

Launched with auspicious beginnings in 1997, Electric Daisy Carnival was first held in Los Angeles, much to the delight of its initial crowd of a few thousand electronic music fans. Since then, it has grown into a global phenomenon. Besides drawing the top talents in electronic and dance music today, EDC is also known for its full-scale carnival rides, over-the-top displays of pyrotechnics, and interactive art installations, not to mention its international community of rabid devotees—in 2013, nearly 350,000 revelers descended upon Las Vegas to experience what is now the world’s largest dance-music festival.

The acclaimed production duo of Dan Cutforth and Jane Lipsitz bring this event to life in brilliant 3-D, going behind the scenes to show what it takes to stage one of the biggest parties in the known universe. They chronicle the unique journeys of individual attendees from all walks of life, all of whom share one common desire—to shed their inhibitions and immerse themselves in this judgment-free celebration of life and music.

Some Background:
Cutforth and Lipsitz’s Magical Elves shingle is responsible for such reality TV mainstays as TOP CHEF and PROJECT RUNWAY. The duo also directed KATY PERRY: PART OF ME, and produced the concert doc JUSTIN BIEBER: NEVER SAY NEVER and the SXSW doc AIR GUITAR NATION. Joining them as executive producers are Pasquale Rotella and Simon Rust Lamb from Insomniac, the company responsible for EDC; and Live Nation Entertainment’s Michael Rapino and John Hopmans. Supervising editor for the project is Kevin Klauber, who also edited Sundance alum 20 FEET FROM STARDOM.

Why You Should Watch:
Fans of electronic and dance music will flock to experience this massive party, guided by the activities of organizers and attendees alike. The various revelers profiled – ranging from a group of young male friends paying tribute to a fallen brother to a free-spirited couple planning to marry at the event – especially serve as a point of entry for audiences who may not have heard of EDC before – think Burning Man with more organized music and hotel rooms – bringing a human side to the sheer spectacle on display.

More Info:
For more information on the EDC, visit its website. As they become available, I’ll link to Cutforth and Lipsitz’s Meet the Artist Sundance video profile and to their Indiewire filmmaker interview. For screening dates and times at Sundance, click the link in the first paragraph.