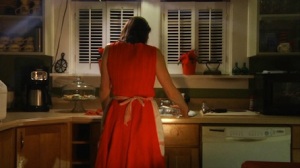 Robert Greene’s study of a woman seeking a different life had its world premiere at True/False earlier this year. It went on to screen at Hot Docs, Nantucket (claiming the Best Storytelling in a Documentary award), AFI Docs, Art of the Real, Sarasota, DMZ Docs, Camden, and the upcoming CPH:DOX, RIDM, and IDFA.

I previously wrote about the film for Nantucket’s program, saying:
Approaching documentary as melodrama, director Robert Greene presents this mesmerizing portrait of a woman who finds herself having to choose between family and career. Actress Brandy Burre was on the verge of breakout success with a recurring part on HBO’s THE WIRE when she discovered she was pregnant. Putting acting to the side, she fled the city for the suburbs to begin a family. A few years later, dissatisfied despite her best efforts to embrace her new role, the compelling Burre seeks a comeback, ultimately upsetting the fragile balance of her present domestic life in unpredictable ways.