On DVD/VOD: CAN’T STAND LOSING YOU: SURVIVING THE POLICE 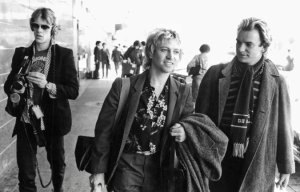 Andy Grieve and Lauren Lazin’s history of The Police from guitarist Andy Summers’ perspective, debuted at DOC NYC in 2012. Additional screenings followed in the Cayman Islands and the Bahamas fests, with a recent theatrical tour prompting the DVD re-release, a Blu-ray debut, and VOD expansion from Vimeo on Demand to also include iTunes and Amazon.

Based on Summers’ 2006 memoir, ONE TRAIN LATER, Grieve and Lazin intercut the musician’s recollections of the trajectory of his career, with his voice-over accompanied by a treasure trove of archival footage from the 1960s-1980s, with more recent footage of The Police’s 2007-2008 reunion tour. While the latter offers fans an opportunity to catch up with the band more or less in the present, the film is at its best when its focused on the past, providing a fascinating behind-the-scenes look at the surprising success of the trio, which, in addition to rare performance clips includes more off-the-cuff clips of early promotional interviews and personal material of Summers’ family life and competing on-the-road life. Although the tensions that led to the dissolution of The Police are mentioned several times, these never quite get the space to breathe on screen, robbing the film of a more dramatic edge. Perhaps even more interesting is the too-brief review of Summers’ very early foray into life as a working musician in the mid 1960s, before he hooked up with Sting and Stewart Copeland.