In Theatres & On VOD: CAFFEINATED 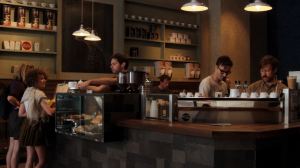 New to VOD and to select theatres this week: CAFFEINATED

Hanh Nguyen and Vishal Solanki’s exploration of the speciality coffee world debuted at Santa Barbara earlier this year. It has also screened at the Amsterdam Coffee Festival and has had limited theatrical bookings in Germany. FilmBuff now releases it on iTunes, Amazon, Google Play, Xbox, Vudu and all major cable providers, as well as a limited theatrical run.

Focusing on coffee in a comprehensive manner, this film takes viewers around the world, tracing the development of the beverage from the picking of the fruit and cultivation of the bean to its enjoyment by end users in a generally conventional survey approach. Whether accompanying coffee buyers as they visit farmers in coffee producing nations like Nicaragua, interviewing coffee house patrons as they happily wax poetic about their addiction, or learning about the development of micro-roasters from coffee historians, Nguyen and Solanki and their subjects treat coffee with such reverence it borders on the pathological, at least for non-coffee culture audiences. For their target audience, however, they have made a very slick-looking documentary – essentially coffee porn – that will be consumed happily and smoothly.