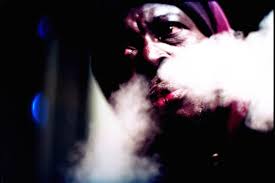 Khalik Allah’s immersive look at life on the Harlem streets made its debut at True/False earlier this year. It has also screened at Sarasota, Maryland, and FID Marseille.

Street photographer Allah trains his camera on the people he runs across at the corner of 125th St and Lexington Ave at night, primarily African Americans, many who speak plainly about using alcohol, drugs, or K2, a popular smokeable synthetic cannabis-like substance, and about a life of poverty in a society that remains unmistakably racist. Aesthetically, Allah makes the unusual choice of disrupting the synchronization of his sound and images – interviews with his subjects play over fragmented, often slow-motion, visuals, never quite synching up – making for an unsettling but somewhat hypnotic effect, at least initially. Within short order, however, this trick, and the film as a whole, feels like an extended, and ultimately repetitive, experiment that hasn’t been fully thought through, netting the same returns at 15 minutes as it does at its full 60 minute running time. Matters are not helped at all by Allah’s running commentary, which grows more intrusive and less interesting as the film proceeds, devolving into self-indulgent semi-mystical philosophizing. It’s unfortunate, as the director clearly has an eye, producing breath-taking moments of unexpected beauty and ugliness within the same frame, and his subjects themselves would seem to have much more of substance to say.