2016 Sundance Docs in Focus: UNDER THE GUN 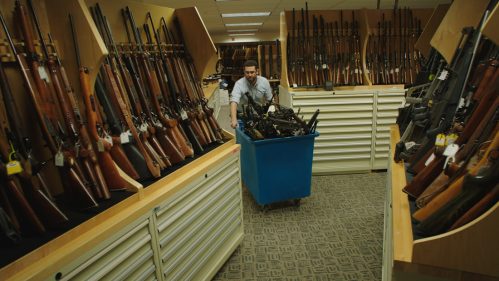 In the past few years, a drastic rise in mass shootings has ripped across the United States, compounding an epidemic of gun violence in our country. Despite a growing body count at the hands of guns, and the outpour of shock and outrage that comes with it, our nation has failed to respond with meaningful action. What is keeping the two sides of this debate – those favoring stricter gun control laws and Second Amendment purists like the NRA – from finding common ground?

Filmmaker Stephanie Soechtig and Katie Couric (the team behind the 2014 Sundance Film Festival hit FED UP) join forces again to create a documentary that is scrupulously comprehensive and decidedly fair to both sides of one of the most polarizing issues that is tearing our country apart. Searing and powerful with never-before-seen footage of the shooting in Aurora, UNDER THE GUN gives a human face to a crisis that is costing us in blood and scarring the conscience of a nation.

Some Background:
Director/Producer: Stephanie Soechtig
This project marks Soechtig’s third feature doc on health and public policy issues, and second at Sundance following FED UP (2014). She developed her investigative approach as a television producer, working on 20/20, Primetime Live, Good Morning America, and The O’Reilly Factor.

Atlas Films’ Lazure and Palmour both previously worked with Soechtig on FED UP, the former also on The O’Reilly Factor.

Executive Producers: Katie Couric, Regina Scully, Michelle Walrath, and Michael Walrath
Noted television journalist Couric reteams with Soechtig following their collaboration on FED UP. As in that film, she serves here as both executive producer and narrator.

Scully’s Artemis Rising Foundation also supports fellow 2016 Sundance docs NEWTOWN, which also explores the consequences of gun violence; MAYA ANGELOU: AND STILL I RISE; RESILIENCE; and THE EAGLE HUNTRESS. She has served as executive producer to several alumni titles throughout the years, including DREAMCATCHER (2015), THE HUNTING GROUND (2015), PRIVATE VIOLENCE (2014), and MISS REPRESENTATION (2011), among others.

Soechtig’s founding partners at Atlas Films, philanthropists and entrepreneurs Michelle and Michael Walrath of the Walrath Family Foundation, return as executive producers, having served in the same roles for both FED UP and the director’s debut, TAPPED.

Editor: Brian Lazarte
Lazarte’s past editing credits include the Sundance alums FED UP, UNDER THE ELECTRIC SKY (2014), and ALIVE INSIDE (2014).

Why You Should Watch:
Tackling a contentious issue head on, Soechtig offers viewers an essential history lesson on the growth of the gun lobby, its concerns, and the consequent impact on public policy, providing crucial context for the ongoing debate. Entrusted with the heartrending stories of high profile incidents of gun violence by family members and survivors, Soechtig assembles a compelling call to action while maintaining an openness to dialogue.