In Theatres: STARVING THE BEAST 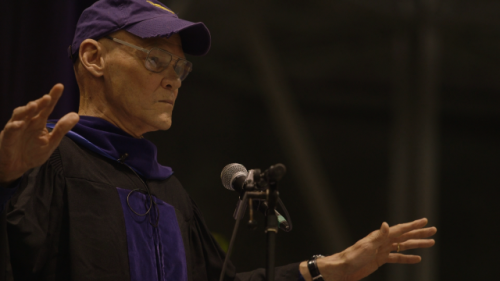 In this impressively detailed and surprisingly balanced examination of disturbing trends over the past several decades, Mims focuses on two related issues: the systematic defunding of state colleges and universities and the attempts to “disrupt” education with reforms repositioning the role of schools as creating desirable workers/consumers rather than educated critical thinkers. The film posits the origins of this business-oriented approach with Clayton Christensen’s influential 1997 screed on disruptive innovation, THE INNOVATOR’S DILEMMA, which was adopted by former University of Texas business professor Jeff Sandefer to draft his “Seven Breakthrough Solutions.” These disruptive proposals have gained favor with governors like Texas’ Rick Perry, Wisconsin’s Scott Walker, and Louisiana’s Bobby Jindal – all politicians seeking to drastically cut government spending, no matter the cost to students, faculty, or the future. Mims shepherds a host of experts to illuminate both sides of the issue, offering audiences much food for thought, but while the topic is not uninteresting, its presentation here can at times be too dense and overly dry, limiting its impact. Still, the film remains a provocative addition to the growing body of nonfiction addressing the challenging current state of education.