This Thursday, October 20 sees the launch of the 14th Doclisboa, Portugal’s premier documentary film festival. The event closes on Sunday, October 30, with the debut of closing night film IN THE INTERSTICES OF REALITY OR THE FILMS OF ANTÓNIO DE MACEDO, João Monteiro’s portrait of a prolific and eclectic New Portuguese Cinema director. Approximately 70 other new documentary features will unspool in the ten days between, with some highlights noted below:

Competitive sections include the Portuguese Competition, which includes Edgar Pêra’s O ESPECTADOR ESPANTADO, on film spectatorship; and Luciana Fina’s THIRD FLOOR, in which a Guinean mother and daughter reflect on love and language; and the International Competition, which includes the world premieres of Kimi Takesue’s 95 AND 6 TO GO (pictured), about the filmmaker’s unexpected creative collaboration with her grandfather; Yuki Kawamura’s A FRIEND FROM SIBERIA, which follows a Japanese director as he visits a blind Russian filmmaker; Ludovica Tortora de Falco’s DO NOT TOUCH ME!, about the friendship between two teenage boys in a Palermo ghetto; and Maximiliano Schonfeld’s THE SLEEPING TIGER, on the search for a sabertooth tiger fossil. 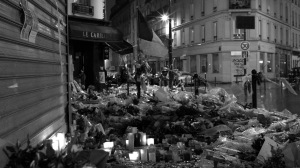 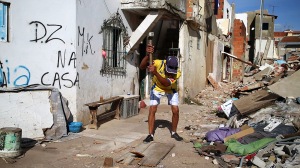 New section From the Earth to the Moon presents a panorama of recent work by celebrated directors as well as current affairs topics. Among the latter are Michael Chanan’s MONEY PUZZLES, an exploration of money, debt, and economic systems; and Catarina Alves Costa’s A ROOM IN THE HOUSE, an exploration of homes and the memories attached to them. Green Years offers a public platform for student and emerging directors, including: Daniel Veloso and Sofia Lemos Marques’ DAMAIA IS OVER BUT WE ARE STILL HERE (pictured), a portrait of a Cape Verdean immigrant neighborhood as it is being demolished; Lukas Rehm and Tilmann Rödiger’s DEFAULT, a multi-perspective look at Athens; Marie Falke’s MARIENSTRASSE, a portrait of the titular German street; and Alyx Ayn Arumpac’s GARAGE INVENTORY, which locates the community and culture around garages in Hungary. 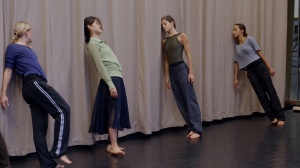 Finally, the arts-focused Heart Beat offers title such as Marie-Hélène Rebois’ IN THE STEPS OF TRISHA BROWN (pictured), on the modern dancer as she brings a piece to the Paris Opera Ballet; Léa Rinaldi’s THIS IS WHAT IT IS, which follows Cuban hip-hop band Los Aldeanos; and Sibila Lind’ AS IF THERE WAS NOTHING ELSE, about the connection between a Portuguese potter and his protege.