On DVD: A COURTSHIP 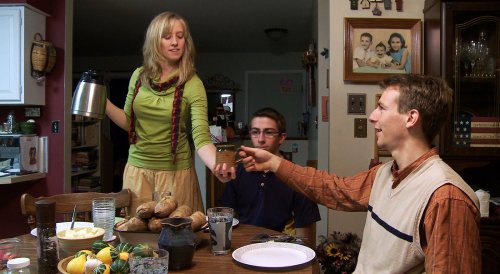 Christian Courtship is viewed by its adherents as a corrective and alternative to secular dating, which is considered inappropriate if not ungodly. Investing trust in God’s intentions, and all decision-making power in the hands of her father, a woman’s prospective suitors must first win over the latter before being allowed to get to know her – and even then, under constant chaperoning until their wedding day. In this conception of courting, a woman doesn’t just save her virginity for her future husband, but also her first kiss, causing much consternation for any who come to Christian Courtship after leading a secular life, such as Kohn’s protagonist, Kelly. In her 30s, Kelly has turned to the Wrights to become her spiritual parents, overseeing her courtship – her own parents’ divorce was responsible for her turn to religion, and they do not understand her passivity in seeking a mate. After much praying the Wrights agreed to serve in this role, taking Kelly into their home until her husband is brought to them by God – if ever. Through the course of the film, Mr Wright is shown too-gleefully interviewing and rejecting one suitor – possibly because of the latter’s acceptance of celibate homosexuals in the clergy – and falling for another one, until a disagreement over religious interpretation relegates Kelly back to a likely future as an old maid. While a frankly backward practice, Kohn seems to want to present it sans judgement, though she undercuts this with some distractingly goofy music choices, and an introduction of the Wrights which immediately paints them in a negative light, encouraging their young daughters not to go to college or have any dreams aside from marriage and motherhood. Regardless, in offering a glimpse into this regressive custom, the modest film indulges a strange curiosity.