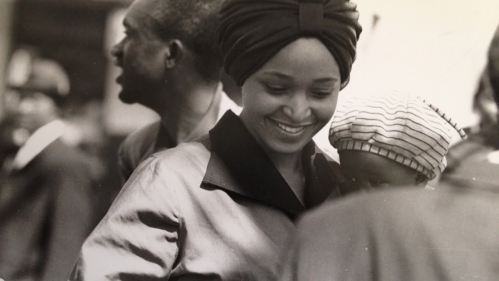 Supremely controversial, Winnie Mandela has been labeled a woman condemned for her radical role in the liberation of her South African people under apartheid. While her husband, Nelson Mandela, remained securely jailed for 27 years, Winnie brushed the patriarchy aside to fight on the front line and take uncompromising steps to inspire an uprising. While Nelson was remembered as a hero, Winnie was demonized in the global media.

Filmmaker Pascale Lamche paints a complex portrait of Winnie Mandela: the woman, the paradox, both exalted and villainized in the eyes of history. Using rich, unseen archival footage and interviews with intimate comrades, Lamche unravels the tale of cause and effect by which Winnie was taken down.

Loved by South African people for her grace and unflinching leadership, Winnie Mandela is situated at the center of her own narrative by Lamche in this groundbreaking film which asks us to question how – and why – history has intimidated and silenced women because of their political power.


This is Lamache’s Sundance debut. She has addressed South African topics in several of her previous films and television productions.

Jörg was formerly commissioning editor for Germany’s ZDF and France’s ARTE before founding his company, Pumpernickel Films in 2009.

Wolting and Felix are the founders and managing directors of Amsterdam-based production company Submarine. They also co-produced fellow 2017 Sundance title NOBODY SPEAK: HULK HOGAN, GAWKER AND TRIALS OF A FREE PRESS.

South African-based producer Markovitz has also brought a number of fiction shorts to the festival in the past.


This is the ARTE commissioning editor’s first Sundance credit.


This is the first Sundance credit for the Ran Entertainment execs.


This is the first Sundance credit for both.


Why You Should Watch:
Lamche makes particularly expert use of archives to transport the viewer back through time to Winnie’s experiences of apartheid, her role in the resistance that ultimately ended the practice, and the sensationalized media that took aim at the outspoken figure.