2017 Sundance Docs in Focus: GIVE ME FUTURE 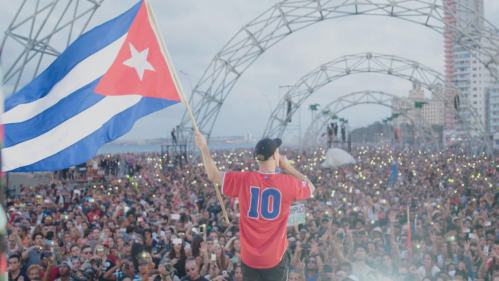 2015 was a landmark year for electronic dancehall superband Major Lazer. After topping the EDM charts with their international hit single “Lean On,” the band continued its world tour, mounting elaborate shows not only in traditional destinations, but also in more challenging locations around the globe. Fueled by a dream of “making the world smaller by making the party bigger,” the group furthered their mission of peace through music with a free concert in the unlikeliest of venues – downtown Havana, Cuba, where no American band at the height of their fame had previously been allowed to perform. Without knowing whether anyone in the country even knew who they were, they hoped to reach a potential crowd of 50,000. After half a million exuberant fans showed up, music history was made on a massive scale.

In what began as a concert film intended to document this groundbreaking event, director Austin Peters turns the camera on a burgeoning youth movement, fusing exhilarating performance footage with authentic stories of cultural and political shifts in a country on the precipice of change.


This is the Peters’ first documentary feature and his debut at Sundance.

Turner is a veteran development and production exec and currently head of scripted and digital content at Matador. He also produced or executive produced Sundance narrative alums WE ARE WHAT WE ARE (2013) and COLD IN JULY (2014).

Peterson is a founder and CEO of Matador with an extensive background in television.


This marks the first Sundance credit for Matador’s EVP and executive in charge of production, respectively.


This is Saizarbitoria first Sundance film. Her previous films have also dealt with Cuba and music.


This is the first Sundance credit for Hedberg.

Why You Should Watch:
Even for viewers who may not be familiar with Major Lazer, Peters’ film captures a true spectacle in the reception of their Havana performance, while weaving in intriguing profiles about life in Cuba, especially in following how Cubans become aware of and disseminate global pop culture.