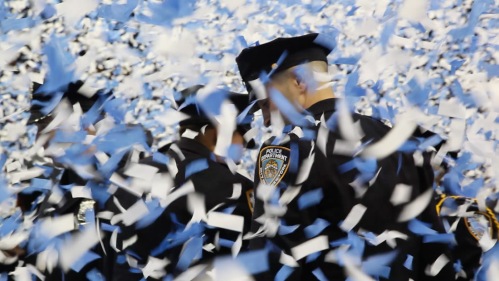 Meet the NYPD12: a group of minority whistleblower officers who risk everything to expose racially discriminatory policing practices and smash the blue wall of silence. CRIME + PUNISHMENT is a captivating and cinematic investigation into the New York Police Department’s outlawed practices of quota-driven policing and officer retaliation. Using secret recordings between officers and commanders, first-hand accounts, and emotional testimony, the NYPD12 detail the explosive truth when no one else will listen. In the meantime, Manny Gomez, an ex-cop turned private investigator, collects testimony from young minorities who have been affected by these policies and targeted by officers in the name of fighting crime.

Stunning cinematography and intimate, character-driven access peel back the layers of institutional bias, exposing a need to re-examine problematic departmental policies that taint officer morale and erode public trust. Told from the rarely heard perspective of active whistleblower officers and the young men and women of color they police, CRIME + PUNISHMENT is a once-in-a-generation film that considers the complexities of police work when faced with the unjust systemic and institutional practices fueling social justice movements across the US.

This project also marks Tuttle’s first at Sundance. He has collaborated with Maing on previous short and television projects.

Metzgar previously contributed to the editing of Maing’s first feature and Emmy-nominated short, and is producing/directing an upcoming Sundance DFP-supported documentary together with him.

The Field of Vision co-founder and Oscar winner for CITIZENFOUR is also an executive producer for fellow US Doc Competition title HALE COUNTY THIS MORNING, THIS EVENING.

Why You Should Watch:
Providing not only the testimony of unjustly persecuted civilians but also the insider perspective of courageous men and women in blue who risk their careers and personal safety, Maing’s exposé serves as a stark indictment of a flawed institution in need of serious reform.