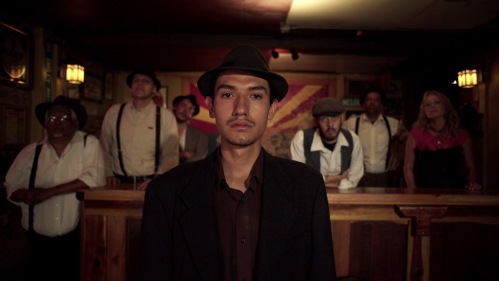 It’s 2017 in Bisbee, Arizona, an old copper mining town just miles from the Mexican border. The town’s close-knit community prepares to commemorate the 100th anniversary of Bisbee’s darkest hour: the infamous Bisbee Deportation of 1917, during which 1,200 striking miners were violently taken from their homes, banished to the middle of the desert, and left to die.

Townspeople confront this violent, misunderstood past by staging dramatic recreations of the escalating strike. These dramatized scenes are based on subjective versions of the story and “directed,” in a sense, by residents with conflicting views of the event. Deeply personal segments torn from family history build towards a massive restaging of the deportation itself on the exact day of its 100th anniversary.

Filmmaker Robert Greene confronts the current political predicaments of immigration, unionization, environmental damage, and corporate corruption with direct, haunting messages about solidarity and struggle. With consummate skill and his signature penchant for bending the boundaries of documentary, Greene artfully stirs up the ghosts of our past as a cautionary tale that speaks to our present.

Greene received support from the Sundance Documentary Film Program for this, his second feature at Sundance. He was also an Art of Nonfiction Fellow (2016), and has extensive credits as an editor, including Sundance narratives GOLDEN EXITS (2017), LISTEN UP PHILIP (2014), and CHRISTMAS, AGAIN (2014). Greene is the filmmaker-in-chief at the Murray Center for Documentary Journalism at the University of Missouri.

Tirola was also an executive producer of fiction alum KILLING TIME (2002). Both have worked with Greene on all of his previous features.

The Emmy-winning Elliott was a Sundance Institute Creative Producing Fellow for this project.

Co-Founder of both Impact Partners and Gamechanger Films, Dreyfous also executive produced 2018 Next documentary 306 HOLLYWOOD and Documentary Premieres title GENERATION WEALTH, as well as WON’T YOU BE MY NEIGHBOR?, OF FATHERS AND SONS, THE TALE, and THE LONG DUMB ROAD, and co-executive produced NANCY.

The Artemis Rising Foundation philanthropist is also an executive producer for GENERATION WEALTH, WON’T YOU BE MY NEIGHBOR, and 306 HOLLYWOOD, and a producer for THE TALE.

Why You Should Watch:
Greene continues his thoughtful interrogation of the nonfiction form, this time via extensive re-enactments and his actors’ contemplative reactions to their roles. The result is a provocative confrontation with contested history crossed with a town-wide group therapy session – at once both specific to Bisbee and disturbingly universal in our increasingly xenophobic present.