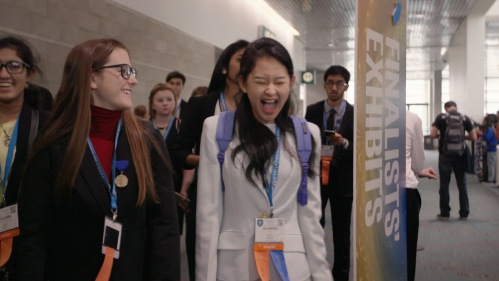 Every year, over 1700 students from 75 countries compete in the annual International Science and Engineering Fair (ISEF), a highly competitive showcase of the world’s top young scientific minds. Selected from millions of students who qualified through sanctioned events to reach the international competition, these finalists are competing for the coveted top prize that, as one previous winner explains, “will change your life in ways you won’t even comprehend.”

Science Fair follows one mentor and nine students from around the world as they prepare their projects and team for the 2017 ISEF event in Los Angeles. Though all are participating for the love of science, we also learn that there are other underlying influences motivating them to pursue their dreams of participating in the competition. Featuring interviews with the charming young scientists, their parents and mentors, as well as past ISEF winners, this absorbing film illuminates a group of amazing young men and women who are on a path to change the world through science.

The Emmy-nominated Costantini works for Fusion Media, where she previously produced a duPont-Columbia Award winning short with Foster. This is her feature documentary debut.

Foster is an Emmy-nominated, duPont-Columbia and Peabody winning filmmaker who has produced for NatGeo, Current TV, PBS, Fusion, and Al Jazeera America, among others. He is the co-founder of production company Muck Media. This is his Sundance debut.

Plunkett is Foster’s Muck Media partner and co-founder. He has produced documentaries for Showtime, ESPN, HBO, Current TV, and Al Jazeera America, among others. This is his first Sundance credit.

Ríos is a journalist who produces for Univision and Fusion, where he has previously collaborated with Costantini. This too marks his first Sundance project.


NOBODY SPEAK: TRIALS OF THE FREE PRESS (2017, additional editor)

Maroney is an Emmy-nominated editor who previously worked on series with Foster.

This is Valdes-Rochin’s first Sundance credit.

Why You Should Watch:
Costantini and Foster capture a wide range of personalities, from confident overachiever to eccentric slacker, and projects, including innovations in aeronautics and in combatting zika, as well as the unforgettable science research teacher and mentor, Dr McCalla, in their enjoyable and inspirational ode to science and learning. It is also one of two docs in this year’s lineup – together with US Documentary Competition entry INVENTING TOMORROW – focused, in distinctly different ways, on the ISEF.