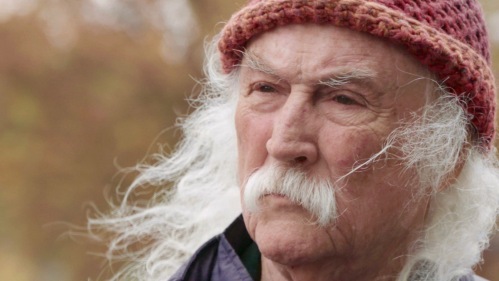 DAVID CROSBY: REMEMBER MY NAME
AJ Eaton presents a remarkably candid, warts and all portrait of the rock and roll legend.

We’re all acquainted with archetypal rock bio-doc tropes: the unexpected rise to stardom, calamitous love affairs, a descent into drugs, and sober reflections from a leather armchair. Amazingly, DAVID CROSBY: REMEMBER MY NAME adds astonishing new dimensionality and meaning to these familiar plot points. From frame one, David Crosby – of The Byrds and Crosby, Stills & Nash (and sometimes Young) fame – ushers us into depths of brutal honesty and self-examination that are almost never revealed on-screen.

With humor and bite, Crosby shares his rocky, 50-year journey as a musician and activist at the forefront of the California rock scene – from his Laurel Canyon days with Joni Mitchell and ecstatic performances with CSNY, to dark times in jail and regretful ruptures with beloved bandmates. Crosby’s willingness to bare shattering personal struggles powerfully combines with producer Cameron Crowe’s disarming interview style to unlock profound truths about our human ego and imperfection. As this twinkly-eyed septuagenarian with a beautiful voice and chronic illness heads back on the road to make a buck, what endures is the transformative nature of music and the possibility of loving unconditionally.

This is the feature debut for Eaton, the son of Steve Eaton, a singer/songwriter whose work led to gold and platinum hits for The Carpenters and Art Garfunkel.

This is surprisingly the first Sundance project for the Oscar and Grammy Award-winning writer/filmmaker, known for several music-focused projects, and who began his career as a teenaged writer for Rolling Stone.

Keach previously produced and directed GLEN CAMPBELL: I’LL BE ME, which was Oscar-nominated for original song and won several Grammy Awards; and produced the Oscar and Golden Globe-winning WALK THE LINE.

Mazursky previously executive produced the Oscar shortlisted KEEP ON KEEPIN’ ON. She is the daughter of acclaimed writer/director Paul Mazursky.

Haerder is SVP of group strategy at BMG Films and has led the company’s development of film and television projects for the past several years.

Rivkin Daum is director of audiovisual operations at BMG Films. She has a background in producing music videos and documentaries.

While this marks Waitt’s first doc at Sundance, he executive produced alumni fiction features DOUBLE WHAMMY, THE MAN FROM ELYSIAN FIELDS, and ROLLING KANSAS for Gold Circle Films, which he established in 2000. Previously, he founded Gateway Computers with his brother Ted Waitt and Mile Hammond.


Why You Should Watch:
Crosby makes for a deeply compelling subject as he tackles the regrets he has and reckons with the impact of the choices he’s made. His disarming honesty makes this one to watch, regardless if the viewer is a fan of his music or not.