2019 Sundance Docs in Focus: KNOCK DOWN THE HOUSE 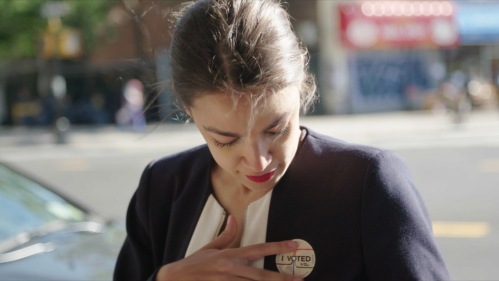 KNOCK DOWN THE HOUSE
Rachel Lears follows the campaigns of four progressive political newcomers as they seek to unseat entrenched incumbents.

Alexandria Ocasio-Cortez, a young, bold Puerto Rican bartender from the Bronx, works double shifts to save her family’s home from foreclosure. Struggling with her own financial problems, she knows many of her neighbors are also hard-pressed to make a living. In order to bring representation to one of the most marginalized constituencies in America, Alexandria runs for office.

This film follows four women – Alexandria Ocasio-Cortez, Amy Vilela, Cori Bush, and Paula Jean Swearengin – who join a movement of insurgent candidates to topple incumbents in an electric primary race for Congress. At a moment of historic volatility in American politics, these four women – all political outsiders – unite to do what many consider impossible. Their efforts result in a legendary upset.

This seamlessly edited and heart-wrenching character story captures these four women’s unlikely journey to inspire Americans to get fired up about the new faces of politics. Director Rachel Lears gives viewers intimate and unprecedented access to the first days of Ocasio-Cortez’s campaign, revealing the candidate’s fierce fight to be elected the country’s youngest member of Congress.

Lears received support from the Sundance Institute’s Documentary Film Program and participated in the Creative Producing Documentary Lab and Summit for her Emmy-nominated previous feature, THE HAND THAT FEEDS, but this marks her first project at the festival.

Olson spent several years at Stephanie Soechtig’s Atlas Films, where, in addition to FED UP, she line produced the feature TAPPED and developed short and viral content related to environmental topics.

Blotnick is also a past Sundance Creative Producing fellow for his previous doc, THE HAND THAT FEEDS.

This marks the first film credit for Graziosi, a journalist with a background in health and medicine who was instrumental to the doc’s Kickstarter crowdfunding campaign.

This is also the first Sundance project for Farahi, a Las Vegas-based cultural anthropologist and filmmaker who also provided additional cinematography on this film.

The Artemis Rising Foundation founder and CEO is an Emmy-winning and Oscar-nominated social entrepreneur and philanthropist focused on transforming culture through media, education, and the arts. She also executive produced fellow 2019 US Documentary Competition title ALWAYS IN SEASON and World Cinema Documentary Competition title SHOOTING THE MAFIA.

Three of Soechtig’s four features have debuted at Sundance. She produces under her Atlas Films banner, co-founded with Michael and Michelle Walrath in 2008.

Lazure joined Atlas after nearly a decade at Fox News. She is a past Sundance Institute Catalyst fellow and Creative Distribution fellow.


Why You Should Watch:
While Alexandria Ocasio-Cortez became a very public figure nationwide as her campaign gained momentum, the other three novice candidates featured in Lears’ film are less well known but cumulatively represent the groundswell of progressive political engagement that has emerged post-Trump, making for an inspiring, hopeful project.