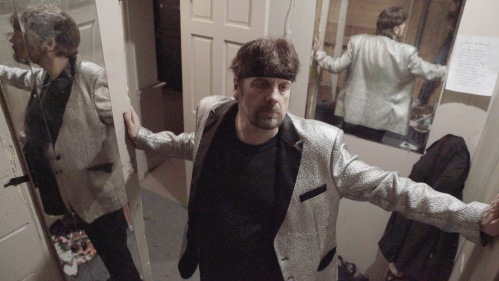 It begins as a documentary about “The Amazing Johnathan,” a uniquely deranged magician who built a career out of shock and deception in the 1980s – but becomes a bizarre story about the unravelling of his documentarian.

After Johnathan is diagnosed with a terminal heart condition and given one year to live, he’s forced to retire his act. Cut to three years later: Johnathan is not dead, much to everyone’s amazement, and documentarian Ben Berman films the illusionist on an epic comeback tour. But as their mutual journey kicks off, Johnathan drops a bombshell that sends the film spiraling into uncertainty. Embracing this unforeseen obstacle, Ben delves deeper to determine what is truth and what is illusion.

Built into the heart of this quick-witted and highly meta story is an indelible commentary on the process and ethics of making a documentary today. Issues of negotiation and access become the central threads that reveal, and further cloud, our understanding of this elusive protagonist. This debut feature is a wild ride that careens off the rails in highly entertaining and unexpected ways.

While this is Berman’s feature debut, he premiered his fiction shorts HOW TO LOSE WEIGHT IN 4 EASY STEPS and I’M A MITZVAH at Sundance. He has a background directing and editing comedic television, notably for Tim & Eric.

Cold Iron Pictures’ CEO and The Film Arcade co-founder Bailey has produced or executive produced past Sundance fiction features SWISS ARMY MAN, THE DIARY OF A TEENAGE GIRL, AGAINST THE CURRENT, and THE SQUID AND THE WHALE.

Beck is a co-founder and partner at The Film Arcade. While the company has distributed several Sundance fiction alumni projects, this is Beck’s first producing credit on a Sundance title.

Kirk Johnson is one half of Beef & Sage, a writing/directing/comedian duo and creative agency that most recently co-wrote the SXSW-debuting comedy feature THE UNICORN, produced by Ralph Smyth Entertainment. This is his first Sundance project.

Mugar previously executive produced Berman’s I’M A MITZVAH and produced the Sundance fiction feature TIM AND ERIC’S BILLION DOLLAR MOVIE. After a career as a comedic television writer/producer, he transitioned to CEO of sports event The Basketball Tournament.


Why You Should Watch:
Berman’s background in comedy is welcomely felt in this unorthodox project, which upends expectations in outrageous ways for both the viewer and the filmmaker alike.