2019 Sundance Docs in Focus: THE INVENTOR: OUT FOR BLOOD IN SILICON VALLEY 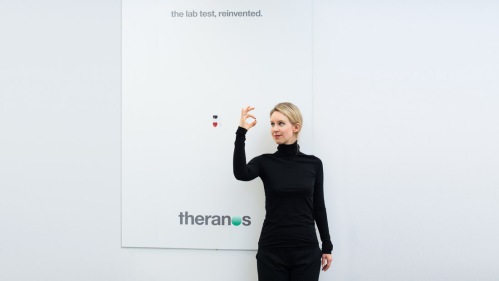 THE INVENTOR: OUT FOR BLOOD IN SILICON VALLEY
Alex Gibney examines the high-profile rise and fall of discredited health tech company Theranos.

Elizabeth Holmes arrived in Silicon Valley with a revolutionary medical invention. She called it “the Edison”: a small, hyper-sophisticated black box that performed 200 tests in minutes, all from a single drop of blood. Needles, laboratories, and the select few companies that controlled them would become instantly obsolete. Like Mark Zuckerberg, Steve Jobs, and Thomas Edison himself, Holmes intended to tear down and revolutionize an entire industry.

The hitch? All of it was a lie. The system was a hoax. And what began as one of 2014’s hottest tech companies – valued at nine billion dollars – dissolved into a fraudulent, bankrupt scheme that exposed Silicon Valley’s underbelly.

THE INVENTOR investigates how Holmes deceived backers as influential as Henry Kissinger and James Mattis, but it also reveals the long-standing American practice of scientific fakery and performance: numerous inventors (including Edison himself) have publicly proclaimed breakthroughs before they actually invented what they boasted about. Master filmmaker Alex Gibney boldly takes on the great myths surrounding America’s entrepreneurial elites at a time when tech titans have never looked so vulnerable to their own hubris.

The prolific Oscar and Emmy winner is the head of Jigsaw Productions.

Jigsaw’s Edeiken previously served as line producer for HISTORY OF THE EAGLES PART ONE and has been post producer for many of Gibney’s recent projects.


WHO KILLED THE ELECTRIC CAR?

Deeter is a northern California-based director/producer who most recently produced DO YOU TRUST THIS COMPUTER?.

This marks the second collaboration between the former editor of Vanity Fair and Gibney.


ROBIN WILLIAMS: COME INSIDE MY MIND
CITY OF GHOSTS
WATER & POWER
THE NEW YORKER PRESENTS
WHERE IN THE WORLD IS OSAMA BIN LADEN? (2008)

Jigsaw Productions’ SVP of production and development has executive produced several of Gibney’s docs and series, most recently including ENEMIES: THE PRESIDENT, JUSTICE & THE FBI and DIVIDE AND CONQUER: THE STORY OF ROGER AILES.

The Jigsaw Productions’ COO and EVP of production also served as producer for Sundance narrative alumni projects, including SUPER TROOPERS (2001).


Why You Should Watch:
Gibney conducts a fascinating postmortem on Theranos, gaining access to whistleblowers, journalists, and others close to the story. Just as important as his investigation into Holmes and entrepreneurial deception is how the film reveals our collective desire to believe in too good to be true claims like those promised by the Edison device. The doc will premiere as one of this year’s Day One screenings.