On TV: LEITIS IN WAITING 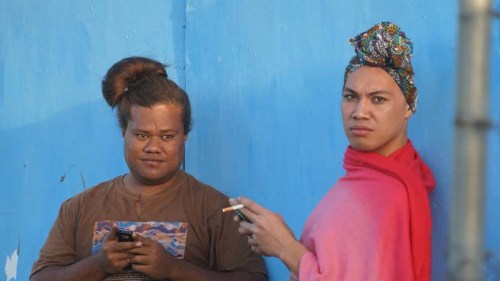 About:
An exploration of the impact of Western prejudices on Tonga’s community of transgender women, known as leitis.

The South Pacific island kingdom of Tonga has long held its transgender citizens in esteem. The leitis play important roles in religious and special events, and have been in service to the royal family for generations. Despite this, the influence of Western prejudices against LGBT individuals, fomented by the encroaching presence of evangelical Christian ministries, has had a negative impact on the leitis, threatening their safety and traditions. Dean Hamer and Joe Wilson, whose previous work has explored LGBT themes, including the life of their collaborator here, transgender Hawai’ian activist Hinaleimoana Wong-Kalu, in KUMU HINA, explore the experiences of leitis under these shifting cultural norms, chiefly Joey Joeleen Mataele. Mataele, a mother figure for the younger women profiled here, is an activist on the global stage and even a mistress of ceremonies for the local leiti pageant. Though the film perhaps tries to tackle a bit too much, resulting in a tendency to over rely on talking heads, it nevertheless offers intriguing insight into non-Western conceptions of gender and how they can be detrimentally affected by outside forces.