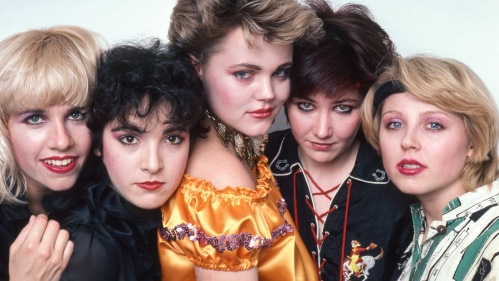 THE GO-GO’S
Alison Ellwood revisits the history of the 1980s pop phenomenon band.

In their early days in the Los Angeles punk scene, Belinda Carlisle and Jane Wiedlin were inspired, ambitious, and determined. They formed an all-girl band, called themselves the Go-Go’s, learned to play their instruments, and wrote their own songs. Their ascent in the early 1980s coalesced with great group chemistry, the birth of MTV and the music video, and their chart-topping album, Beauty and the Beat. However, as the pressure of fame and success grew, a familiar story set in, and hard drugs and alcohol, infighting, and resentment began taking their toll on them.

With candid interviews from the band themselves and other industry insiders, THE GO-GO’S shines with first-person tales, hilarious anecdotes, and juicy gossip. Director Alison Ellwood digs deep into the annals of Go-Go’s history, revealing all their hard work and exciting times, along with the messy truths and painful consequences, while never losing sight of their accomplishments. To this day, the Go-Go’s live on and remain one of the most successful bands who paved the way for female musicians in the music industry.

Ellwood is an Emmy-nominated filmmaker and editor, best known for her many collaborations with Alex Gibney’s Jigsaw Productions.

The Emmy-nominated Birney is the founder of Fine Point Films.

Blackman is head of film & television development and production for Universal Music Group. Among the projects he recently executive produced is the Oscar shortlisted THE APOLLO.

The Emmy-nominated Byrne is also part of Fine Point Films.


WE STEAL SECRETS: THE STORY OF WIKILEAKS (2013)
MAGIC TRIP
CASINO JACK AND THE UNITED STATES OF MONEY


Why You Should Watch:
Ellwood is no stranger to portraits of famed music groups, making her a fitting choice to take on the Go-Go’s. Deftly balancing a rich archive, candid interviews with the outspoken bandmates, and, of course, a fantastic soundtrack, she gives the groundbreaking group its due, without sugarcoating the more contentious and darker parts of their history.