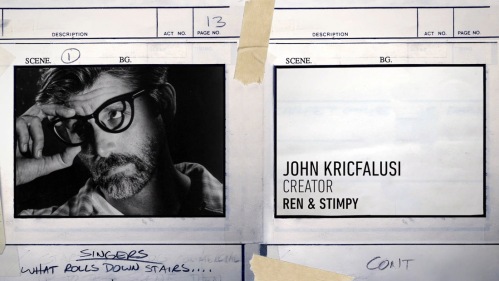 In the early 1990s, the animated show REN & STIMPY broke cable ratings records and was a touchstone for a generation of fans and artists. Creator John Kricfalusi was celebrated as a visionary, but even though his personality suffused the show, dozens of artists and network executives were just as responsible for the show’s meteoric rise. As Kricfalusi’s worst impulses were let loose at the workplace and new allegations about even more disturbing behavior have surfaced, his reputation now threatens to taint the show forever.

With clips recognizable to any REN & STIMPY fan and interviews with Kricfalusi and his fellow creators whose work has been both elevated and denigrated by their connection to him, this film is a complex look at a show that influenced the history of television, animation, and comedy. More than a celebration, HAPPY HAPPY JOY JOY: THE REN & STIMPY STORY forces us to consider the role of media creators and how we reckon with the reality of who they are versus what we see on the screen.

Cicero has a background in commercials, branded content, and short form content. Working through his Los Angeles-based production company INVADER, this is his directorial debut.

Easterwood also serves as director of photography for the film, his directorial debut. He is a photographer and fine artist.

Wade previously wrote/directed/produced TRACKS, a dramatic feature based on his life, but this marks his documentary debut. He has a background in finance.

Maverick is a jewelry and accessories designer, and, together with Kimo Easterwood, runs the Portland Prohibition-themed bar Bible Club. This is his first film credit.

This is Dobson’s first Sundance project.

Anders runs the pop culture blog Fülle Circle Magazine, where he has written about his love for THE REN & STIMPY SHOW. This is also his first Sundance credit.

Burchard is a documentary director and editor working with Cicero’s INVADER.


Why You Should Watch:
While fans of REN & STIMPY naturally will be drawn to Cicero and Easterwood’s look back at the influential show, their exploration of John Kricfalusi’s vision and hubris – and his impact on collaborators and fans – make the project of broader interest to the uninitiated. Like fellow 2020 Sundance doc FEELS GOOD MAN, their film addresses how much art develops its meaning and reception because of – or, at times, despite – the artist’s intentions.