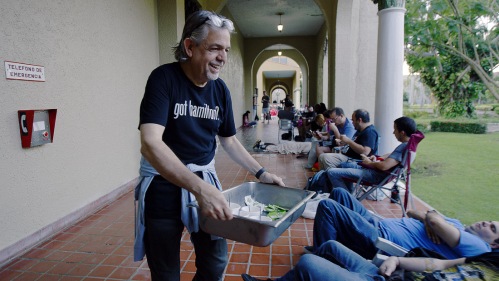 When Luis A Miranda Jr left Puerto Rico for New York City in the 1970s, he had big dreams – but little did he know how far he’d go. Landing an influential position in New York City mayor Ed Koch’s administration as the director of Hispanic affairs, he built a career representing Latinx (and largely, due to their prevalence in the city, Puerto Rican) communities, helping to elect some of the most powerful politicians in the country.

Over the course of an intense year, Luis’s devotion to family and country propel him forward despite recent health issues. He finds that there is always more to do, especially when his beloved Puerto Rico is in need. Following the devastation of Hurricane Maria, he helps plan relief efforts and, to raise money and awareness, manages the logistics behind bringing his son Lin-Manuel Miranda’s award-winning production of HAMILTON to the island. With humor and a lot of heart, SIEMPRE, LUIS tells the story of a unique and proud American.

James is founding partner at NYC brand and creative marketing firm Particle. This is his directorial debut.

Taber has a background producing documentary projects, including several for PBS series Frontline and Nova.

Garcia de Dios primarily has a background as a cinematographer, a role he also plays for this film.

Stolper is the founding partner of the Stolper Group. He serves as the general counsel of East Harlem’s Amber Charter School, founded by Luis Miranda.

This is the first Sundance project for the Brooklyn-based filmmaker/writer.


Why You Should Watch:
Luis Miranda makes for an affable, charismatic subject in James’ portrait, offering HAMILTON fans, in particular, a unique, behind-the-scenes look at a key figure involved in that phenomenon.