2020 Sundance Docs in Focus: WE ARE FREESTYLE LOVE SUPREME 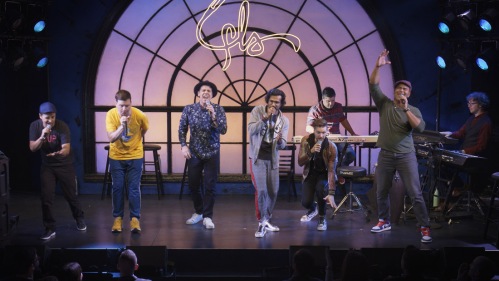 WE ARE FREESTYLE LOVE SUPREME
Andrew Fried chronicles the development of the improv hip-hop performance group.

Well before the world knew of the award-winning Broadway musicals IN THE HEIGHTS and HAMILTON, a young, bright-eyed Lin-Manuel Miranda was in an improv hip-hop group called Freestyle Love Supreme, along with director Thomas Kail and performers Christopher Jackson and Anthony Veneziale. Freestyle Love Supreme was a way for these carefree artists out of college to experiment with theatre and craft their own unique musical sound. This film chronicles a 15-year journey of twists and turns, friendship, and unprecedented musical talent – culminating with much-anticipated reunion performances in New York City in 2019.

Filmmaker Andrew Fried began with a small SD camera in the summer of 2005, capturing the early days of Freestyle Love Supreme beatboxing on the sidewalks – unaware of how their story would unfold. Fourteen years later, after directing famed series like CHEF’S TABLE and 7 DAYS OUT, Fried revisits old footage to craft this fated story. Both poignant and inspired, WE ARE FREESTYLE LOVE SUPREME recalls the creative dreams of youth and why this project still means so much to these accomplished performers.

Fried is the Emmy-nominated founder and president of Boardwalk Pictures, and has an extensive background as an executive producer of docuseries.

Roma has worked on numerous docuseries for OWN, Netflix, and Spike.

Kail is a Tony- and Emmy-winning film and theatre director, known for directing IN THE HEIGHTS and HAMILTON. He is a founder of Freestyle Love Supreme.

Miranda is the Oscar-nominated and Emmy-, Grammy-, and Tony-winning creator of IN THE HEIGHTS and HAMILTON and a founder of Freestyle Love Supreme. He is also featured in fellow 2020 Sundance doc SIEMPRE, LUIS, about his father; and appears in MUCHO MUCHO AMOR, in the US Documentary Competition.

Furman is a Tony-winning theatre producer, known for IN THE HEIGHTS, HAMILTON, and FREESTYLE LOVE SUPREME, among other titles.

Lillegard is VP and Wynne is EP of Boardwalk Pictures. This is their first Sundance credit.

Kamen is the Emmy-nominated chairman and CEO of RadicalMedia. He also executive produced fellow 2020 Sundance doc SPACESHIP EARTH, in the US Documentary Competition.

This is the first Sundance project for both Anton and Curtis.

Why You Should Watch:
HAMILTON fans not already in the know about Freestyle Love Supreme will delight in early footage of Lin-Manuel Miranda, learning how this creative outlet intersected with the creation of his popular musicals, as well as the display of talent from the other members of the troupe through the years.