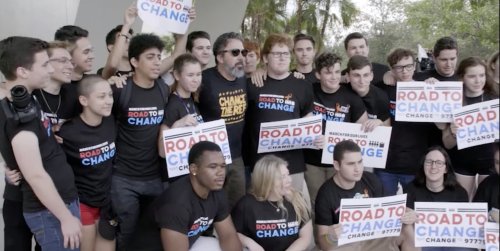 About:
A portrait of survivors and family members in the aftermath of the Marjory Stoneman Douglas school shooting.

The tragic 2018 shooting in Parkland FL has inspired much reflection about gun violence and student activism – as well as several documentaries. Cheryl Horner’s film is not even the latest, with Kim A Snyder’s US KIDS on the same topic having made its high-profile debut at Sundance this January. Like that film, Horner’s project focuses less on the horrific event to instead spotlight its aftermath. Specifically, the film explores the activism that the shooting engendered in students like the charismatic David Hogg, as well as the activities of victim Joaquin Oliver’s father, Manuel, who channels his response through art. Both of these figures are compelling – so much so that they have already been featured extensively in other docs and news media, making the film, while earnest and affecting at times, feel overly familiar and somewhat underdeveloped as a result.