On DVD: ORNETTE: MADE IN AMERICA 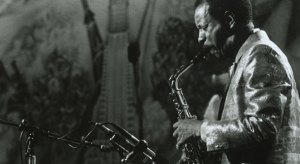 Newly available on DVD this week: ORNETTE: MADE IN AMERICA

Shirley Clarke’s freeform profile of a modern jazz master debuted at Toronto in 1985. Rarely seen for years, the documentary was restored by the UCLA Film & Television Archive, screened at Berlin in 2012, and was re-released theatrically that same year. In addition to the release of the restored version on DVD, the film comes to Blu-ray for the first time ever.

In what ended up as the pioneering director’s final film, Clarke set out to capture the freewheeling sense of her subject, jazz musician Ornette Coleman, without exactly crafting either a traditional biography or concert film. Elements of both appear, but they’re joined by eclectic flights of fancy, from re-enactments to video game effects, strobelike editing to bizarre lunar animations. Grounding the film is “Skies of America,” the avant-garde score Coleman composed for the Fort Worth Symphony Orchestra – in addition to footage of the performance on a day honoring native son Coleman in 1983, it plays in the background throughout Clarke’s unusually constructed, non-linear project, which attempts to convey a sense of Coleman’s humble beginnings; his relationship with his son, also a member of his band; his creative process; and his varied inspirations and influences. Frankly, it’s a tall order – despite its at times refreshing resistance to conventions, the film feels messy rather than strongly connected to Coleman’s work or approach, with the special video effects looking especially dated. Despite this, interviews with the soft-spoken Coleman – and for music lovers, his performance footage – make Clarke’s film a worthwhile, if uneven, watch.