2015 Sundance Docs in Focus: LISTEN TO ME MARLON 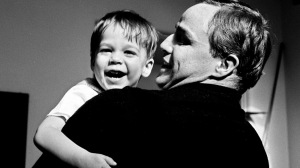 Today’s third Sundance profile is the fifth of six UK productions in this year’s World Cinema Documentary Competition: Stevan Riley’s LISTEN TO ME MARLON, an assessment of Marlon Brando’s life and career through his own words.

Marlon Brando was one of the most acclaimed and influential actors of all time. He also was one of the most elusive and enigmatic. Featuring exclusive access to Brando’s previously unseen and unheard personal archive, including hundreds of hours of audio, LISTEN TO ME MARLON sheds light on the artist and the man. Charting Brando’s exceptional career and extraordinary personal life with the actor himself as guide, the film explores his complexities, telling the story entirely in his own voice. No talking heads, no interviewees: just Brando on Brando.

Director Stevan Riley creates a unique cinematic experience that dives into the inner space of Brando’s mind through the illuminating use of archival material. The result shows not how different he was from the rest of us but rather how similar. Emotionally potent, the film stands as a triumph of Riley’s knack for story craft and vision in creating a powerfully absorbing portrait.

Some Background:
This project is director/editor/writer Stevan Riley’s fifth documentary feature; his previous films have screened at London, Tribeca, and Silverdocs, among other events. He counts three Sundance alumni as his producers: John Battsek, who also has two other projects in this year’s festival, CHUCK NORRIS VS COMMUNISM and DRUNK STONED BRILLIANT DEAD: THE STORY OF THE NATIONAL LAMPOON, and most recently produced last year’s CAPTIVATED: THE TRIALS OF PAMELA SMART, THE GREEN PRINCE, HAPPY VALLEY, and WE ARE THE GIANT; RJ Cutler, who previously directed THE WORLD ACCORDING TO DICK CHENEY (2013), THE SEPTEMBER ISSUE (2009), and ANITA LIBERTY (1997); and produced THIN (2006) and MONTE HELLMAN: AMERICAN AUTEUR (1997); and George Chignell, co-producer of SEARCHING FOR SUGAR MAN (2012) and PROJECT NIM (2011). Battsek’s Passion Pictures’ colleague Nicole Stott serves here as co-producer; she also executive produced CHUCK NORRIS, CAPTIVATED, and THE GREEN PRINCE, and co-produced SUGAR MAN. Executive producing this project is Andrew Ruhemann, who played the same role on WE ARE THE GIANT, CAPTIVATED, SUGAR MAN, and PROJECT NIM, among several other past Park City films.

Why You Should Watch:
Riley’s adept use of Brando as a resurrected narrator and guide through his own life perfectly captures the mythical, larger than life aspects of the actor. His ethereal presence allows the project to transcend the conventions and expectations of a simple celebrity biography, giving the film a fascination and appeal that will resonate beyond existing fans of the performer to reach broader audiences.

More Info:
As they become available, I’ll link to upcoming features, such as Indiewire‘s filmmaker interviews and the film’s trailer and website. For screening dates and times at Sundance, click the link in the first paragraph.