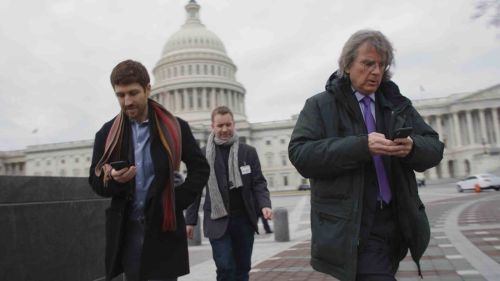 Technology wizards have masterminded a new form of capitalism, and humanity is now the raw resource feeding the machine. Powerful, hidden artificial intelligence tasked with hijacking our attention is tearing apart social norms, jeopardizing truth and democracy, and putting civilization on a programmed path toward self-destruction.

Set in the dark underbelly of Silicon Valley, THE SOCIAL DILEMMA fuses investigative documentary with enlightening narrative drama – think AN INCONVENIENT TRUTH meets THE MATRIX. Expert testimony from tech whistle-blowers exposes our disturbing predicament: the services Big Tech provides – search engines, networks, instant information, et cetera – are merely the candy that lures us to bite. Once we’re hooked and coming back for more, the real commodity they sell is their prowess to influence and manipulate us.

Award-winning filmmaker and environmentalist Jeff Orlowski (CHASING ICE, 2012; CHASING CORAL, 2017) disrupts the disrupters by uncorking the invisible story purring from that mobile phone hidden in your pocket. Cunningly entertaining, THE SOCIAL DILEMMA sounds the alarm on surveillance capitalism in hopes of preserving the very fabric of our society before it’s too late.

This is Orlowski’s third documentary feature, which participated in Sundance Institute’s Catalyst Forum in 2018. He is also an executive producer of fellow 2020 Sundance doc SOME KIND OF HEAVEN, in the Next section. Both of his previous features have been shortlisted for the Best Documentary Feature Oscar, won Emmys, and picked up awards at Sundance. Orlowski is the founder and director of Exposure Labs, which focuses on socially relevant projects.

Rhodes is an Emmy-winning producer and director of creative development at Exposure Labs.

Wright has previously served on the crews of Sundance alumni docs RACING EXTINCTION (2015), BEING EVEL (2015), and THE GAME CHANGERS (2018).

David is an environmental activist, author, and producer.

Reisman is founder/CEO of Canada’s Indigo Books and Music and a philanthropist. Her foundation, the Gerald Schwartz & Heather Reisman Foundation, has made a major gift to the University of Toronto to construct an innovation center focused on AI and its interaction with the public.

The Cornfields are philanthropists and environmentalists supporting projects that offer innovative, pragmatic, and sustainable solutions to complex current problems. They also executive produced fellow 2020 Sundance doc feature A THOUSAND CUTS, in the US Documentary Competition.

The Ahrens are the principals and co-founders of Argent Pictures. They previously produced or executive produced Sundance alumni fiction features THE BIRTH OF A NATION and SELAH AND THE SPADES. Both have a background in real estate and law.

Renzo is president/CEO of Argent Pictures and a managing partner of law firm Premier Family Office. He previously co-produced or executive produced THE BIRTH OF A NATION and SELAH AND THE SPADES.

Weinman is a founder of the LinkedIn-acquired online software training website Lynda.com. She previously worked in animation and special effects for Hollywood studio films and taught digital media and graphics. Weinman also executive produced this year’s DISCLOSURE: TRANS LIVES ON SCREEN in Documentary Premieres, US KIDS in the US Documentary Competition, and THE TRUFFLE HUNTERS in the World Cinema Documentary Competition.

Heavin is co-founder/former chief creative officer of Lynda.com, and an artist with a background in photography, illustration, and motion graphics.

Adelman is a children’s book author and teacher who is committed to bettering the lives of children and family through education, storytelling, and film. She also serves as executive producer on THE TRUFFLE HUNTERS and US KIDS.

Herman is a philanthropist who has partnered with fellow executive producer Hallee Adelman to support film, television, and theatre projects with social impact or that serves children and families. She also executive produced THE TRUFFLE HUNTERS and US KIDS.

Shannon O’Leary Joy is an environmentalist and philanthropist.

Buglioli is the chairman/CEO of financial services and tech company Viewpointe. Orfalea is the founder and president of the Natalie Orfalea Foundation and a member of Impact Partners and Chicago Media Project. They have been investors in numerous past Sundance titles. Buglioli is also a co-executive producer of 2020 Sundance title FEELS GOOD MAN, in the US Documentary Competition.

Grossinger is a principal for strategic consulting firm Democracy Partners, where he leads the impact philanthropy and donor advising division. Klagsburn is co-founder (with husband Grossinger) and president of the CrossCurrents Foundation, which focuses on civic engagement, environmental concerns, human rights, and the arts, and previously funded Sundance doc alumni DARK MONEY.


WON’T YOU BE MY NEIGHBOR?

Curtis is part of the team at Orlowski’s Exposure Labs.


Why You Should Watch:
If Orlowski wasn’t drawing on the expertise of high-level, tech world insiders – individuals who have held key positions at Facebook, YouTube, Google, Twitter, etc – skeptics might consider this cautionary tale a work of conspiracy fiction. All the more disturbing because it is true, his latest film is a provocative wake up call about just how much of ourselves we’ve already ceded to technology.