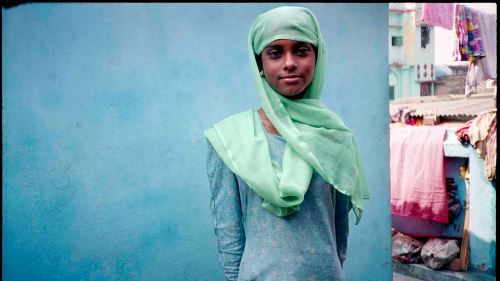 BORN INTO BROTHELS
Zana Briski and Ross Kauffman capture several children of prostitutes living in Calcutta as they learn photography.

Festival Section:
From the Collection

Directors Zana Briski and Ross Kauffman chronicle the amazing transformation of several children growing up in Calcutta’s red-light district. Briski, a professional photographer living in and documenting the brothels, is inspired by the children’s curiosity with her camera and gives them photography lessons and cameras of their own, igniting the latent spark of artistic creativity within them. The cameras empower them to document and share their world, and their photographs are a testimony to the power of the indelible creative spirit.

BORN INTO BROTHELS received a Sundance Institute Documentary Fund grant, was supported by the Documentary Composers Lab, and premiered at the 2004 Sundance Film Festival, where it won the Documentary Audience Award. The film, which highlights the immensely restorative, empowering, and liberating nature of art, went on to win an Academy Award for Documentary Feature in 2005.

Briski is an acclaimed photographer and the founder of nonprofit Kids with Cameras, which empowers marginalized children by teaching them photography. In addition to the Oscar, she won an Emmy, Spirit, and IDA Award, among other accolades, for BROTHELS, on which she also served as a cinematographer.

In addition to his awards for BROTHELS, Kauffman went on to be Emmy nominated for E-TEAM, which also picked up a cinematography award at Sundance. He also served as a cinematographer on BROTHELS.

The Oscar and Emmy-winning co-founder of both Impact Partners and Gamechanger Films also has produced several Sundance fiction and VR alumni projects and has served as a creative advisor for Sundance’s Catalyst Forum. For the 2020 festival, she also serves as executive producer for SPACESHIP EARTH and US KIDS, in the US Documentary Competition; ON THE RECORD, GIVING VOICE, AGGIE, and ASSASSINS, in Documentary Premieres; as well as THE TRUFFLE HUNTERS in the World Cinema Documentary Competition; and executive producer/key collaborator for the New Frontier exhibition PERSUASION MACHINES.


Why You Should Watch:
Sundance’s From the Collection section annually provides audiences with an opportunity to see a classic past selection, restored, and with the presence of the filmmakers. Briski, Kauffman, and one of their film’s subjects, will participate in a conversation after this special screening as they revisit their film 16 years later.