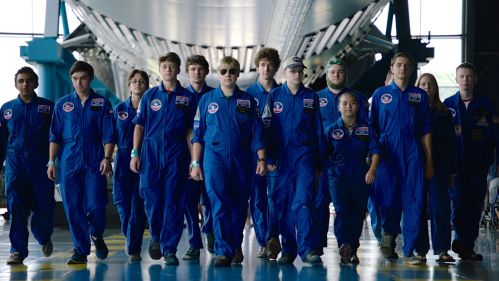 THE MARS GENERATION
Michael Barnett checks in with the would-be astronauts of the future.

Since NASA’s first mission to Mars in 1964, humanity has seen the planet as the ideal target for the first interplanetary space mission. In THE MARS GENERATION, director Michael Barnett delves into space exploration’s history and current state while looking beyond technology to what we will really need to get to the Red Planet: the power of youthful dreams.

Through amazing archival footage of the space program as well as interviews with a number of scientists and astronauts – including Neil deGrasse Tyson, Bill Nye, and Sunita Williams – Barnett provides an overview of the history and current state of space exploration. The film juxtaposes this with a revealing and intimate look at participants in NASA’s space camp for youth. These self-proclaimed “space nerds” aspire to be the scientists, engineers, and technicians on whose shoulders humanity will reach the Red Planet. Their infectious passion and optimism is the heart of the film, leaving little doubt that if given the support and opportunities they need, they will get us there.

Some Background:
Director/Director of Photography:


Barnett’s third documentary feature is his first Sundance credit, but he has done camerawork on Sundance narrative alums including ADVENTURES OF POWER (2008) and ME AND YOU AND EVERYONE WE KNOW (2005). His most recent film was BECOMING BULLETPROOF.


This marks the first Sundance credit for Tucker, while Francalancia was on the production crew of Sundance alum THE JINX: THE LIFE AND DEATHS OF ROBERT DURST (2015).


Estevez was a production coordinator on Sundance alum HOLY HELL (2016), but this marks her first feature producing credit.

The Emmy-nominated Cotner is director, original documentaries for Netflix. He formerly was an acquisitions exec for Open Road Films and Paramount Pictures.

The director, original documentary programming at Netflix was formerly the commissioning editor of The New York Times Op-Docs section.

Nishimura is VP, original documentary and comedy programming at Netflix.

Why You Should Watch:
Weaving in the aspirations of the next generation of space explorers with the views of past astronauts and scientists, Barnett compellingly demonstrates the need to reawaken our broader society’s interest in space – for everyone’s sake. The doc receives a larger spotlight at the festival as the Salt Lake City Opening Night Film.