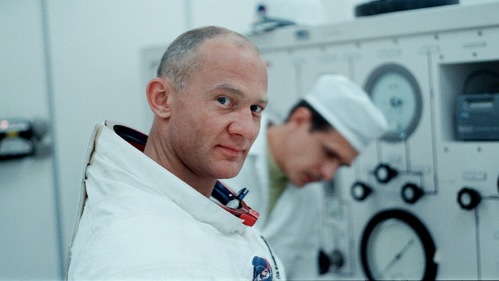 Courtesy of Sundance Institute | photo by NEON and CNN Films.

NASA’s vaults open for the first time to spill this exquisite, never-before seen audio and 70 mm film footage of the Apollo 11 mission. The meandering cameras in Cape Canaveral capture a dreamy-eyed portrait of America as it stepped into the future, and from inside the Apollo 11 spacecraft, the amazingly jocular conversation of the astronauts punctuates each stage of the mission with lightness and charm. Yet the crowds watching the rocket are oblivious to the enormous pressure mission control is under to succeed.

Director Todd Miller takes you straight to the heart of this intense scientific and human endeavor, sharing the atmosphere and action around the final moments of the preparation, liftoff, landing, and return of the famed moon-landing mission. The footage is so clean and vibrant, it is as if you are standing at the base of the rocket. Exquisitely crafted and realized, this truly immersive experience offers a new look into one of humanity’s greatest achievements, leaving us to marvel at human ingenuity and the impulse that led humanity to space.

Miller previously explored NASA history with his short doc, THE LAST STEPS, also made in collaboration with CNN Films. He picked up an Emmy Award for his most recent feature, DINOSAUR 13.

Peterson was the director of photography on DINOSAUR 13, and is a partner with Miller in their Brooklyn-based production company, Statement Pictures.

Hannibal is an associate director at CNN Films, following several years working for the Tribeca Film Institute. She also serves as a supervising producer for fellow 2019 Sundance title HALSTON, screening in Documentary Premieres.

The Emmy-winning Entelis, CNN’s EVP for talent and content development, and Sexton, VP for CNN Films, are also executive producers of HALSTON.

Together with his twin Dan, the Emmy-winning Braun is co-founder and co-president of Submarine Entertainment, a leading sales agency that represents numerous titles at Sundance each year.

Why You Should Watch:
Miller’s film draws audiences back to the promise of postwar America and the Space Age, with footage so remarkably vivid it could have been shot today rather than 50 years ago. Truly cinematic, general audiences will have the chance to experience the doc in theatres thanks to NEON, which acquired the project this past Summer, while Sundance gives it added exposure by premiering the film as one of this year’s Day One screenings.