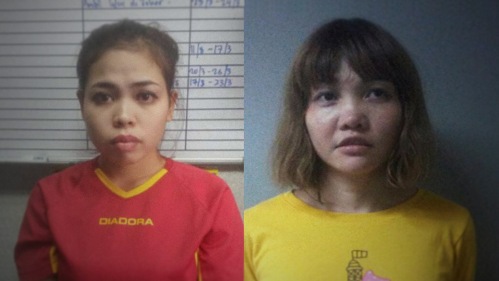 ASSASSINS
Ryan White investigates the bizarre story behind the assassination of the half-brother of Kim Jong-un.

The mysterious murder of North Korean royal family member Kim Jong-nam in Malaysia sparks a captivating global investigation. At the center of the story, two women are on trial for the murder. Are the women ruthless assassins or political pawns in a twisted game?

The investigation goes far beyond the headlines, probing further into each woman’s upbringing, one in rural Indonesia and one in Vietnam, and, ultimately, what led them to participate in an alleged prank show that ended with Kim Jong-nam dead. ASSASSINS questions every angle of this murder case, from human trafficking to high-level political espionage to the inner dynamics of the North Korean royal family.

Filmmaker Ryan White (THE CASE AGAINST 8, ASK DR RUTH) returns to Sundance Film Festival with another suspenseful, heart-wrenching exploration of a vital story of the moment. Equal parts rigorous investigation and empathetic portrait, ASSASSINS shines a light on the global ramifications of this case and the life at stake for two young women in a dangerous plot.

White picked up the Sundance US Documentary Competition Directing Award for THE CASE AGAINST 8, which went on to be shortlisted for the Academy Award and nominated for an Emmy. He also directed the Emmy-nominated Netflix docuseries THE KEEPERS.


ASK DR RUTH
THE CASE AGAINST 8

Hargrave is White’s producing partner at Tripod Media. She has worked on five of his features as well as THE KEEPERS. Hargrave also served as a past advisor to Sundance’s Women’s Financing Intensive.

Oathout is also part of Tripod Media, and worked on THE KEEPERS.

Clark is an acclaimed journalist who wrote a longform story on the assassination for GQ, “The Untold Story of the Accidental Assassins of North Korea.”

Cogan, the Oscar-winning co-founder and chairman of Impact Partners, has recently launched Story Syndicate, his own production company in partnership with acclaimed filmmaker Liz Garbus. He also serves as executive producer for fellow 2020 Sundance titles SPACESHIP EARTH and US KIDS, in the US Documentary Competition; EPICENTRO, in the World Cinema Documentary Competition; and ON THE RECORD, and GIVING VOICE, in Documentary Premieres.

The Oscar and Emmy-winning co-founder of both Impact Partners and Gamechanger Films also has produced several Sundance fiction and VR alumni projects and has served as a creative advisor for Sundance’s Catalyst Forum. For the 2020 festival, she also serves as executive producer for SPACESHIP EARTH, US KIDS, GIVING VOICE, and ON THE RECORD; as well as THE TRUFFLE HUNTERS in the World Cinema Documentary Competition; AGGIE in Documentary Premieres); BORN INTO BROTHELS in From the Collection; and is executive producer/key collaborator for the New Frontier exhibition PERSUASION MACHINES.

This is the first Sundance credit for both Kembhavi and Vazquez.

Why You Should Watch:
Returning to the true-crime terrain of his hit docuseries THE KEEPERS, White carefully traces the bizarre plot against Kim Jong-nam and the stories of the two women (unwittingly?) implicated in his murder. The compelling film that results perfectly exemplifies the idea that truth is stranger than fiction – but will anyone believe the assassins’ version of the truth?