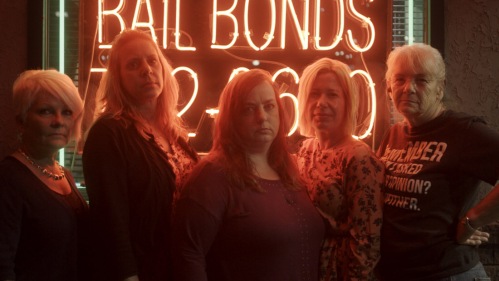 For the last twenty years, Richard Scott Smith’s wooing of women has followed a consistent path: romance, commitment, identity theft, fraud. Preying on unsuspecting women who yearned for connection and passion, Smith would lure them in with charm and promises before ultimately robbing them of both their money and their dignity – and then vanishing. As the women left in his wake find out about each other and discover strength in their growing numbers, they seek to bring the justice he continues to evade – aided by a chain-smoking, no-nonsense bounty hunter named Carla.

Crafting a story of redemption that tracks embattled victims as they become their own heroes, co-directors Heidi Ewing and Rachel Grady present each woman’s pain as unique even though their stories may be similar. They deftly navigate intimate moments of recollection, the rage of powerlessness, and the singular focus of action. Hell has no fury like a woman scorned, and these women are ready to burn.

Grady is an Emmy-winning and Oscar-nominated director and partners with Heidi Ewing in Brooklyn-based production company Loki Films.


NORMAN LEAR: JUST ANOTHER VERSION OF YOU
DETROPIA
12TH & DELAWARE

Ewing shares the same accolades as her Loki Films partner Grady. She also makes her solo fiction directorial debut at Sundance this year with I CARRY YOU WITH ME, in the NEXT section.


NORMAN LEAR: JUST ANOTHER VERSION OF YOU

Takats also serves as the film’s cinematographer. He previously associate produced Grady/Ewing’s ONE OF US.

Emmy winner Malhotra is EVP, nonfiction programming for Showtime. He is also an executive producer for fellow 2020 Sundance Special Events docuseries THE TRADE.

Goodman Kass has a background in television docuseries as a showrunner and producer. She previously line produced Sundance alumni fiction feature TREASURE ISLAND.


NORMAN LEAR: JUST ANOTHER VERSION OF YOU

Marlow also was one of the editors of ONE OF US.

Why You Should Watch:
Featuring unforgettable subjects, an elusive, despicable villain, and perfectly paced storytelling, Grady and Ewing have crafted an addictive, binge-worthy series about women uniting to find justice. The docuseries will premiere as one of this year’s Day One screenings. Those who don’t catch it in Park City will be able to view the series on Showtime beginning on May 8.